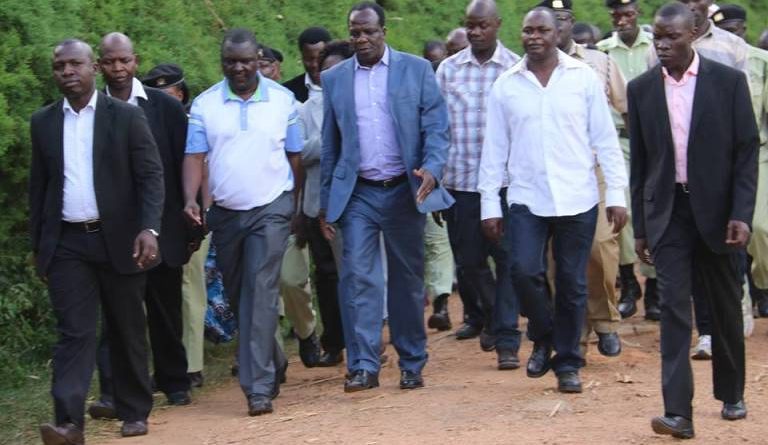 Kakamega County Governor, H.E Hon. Wycliffe Ambetsa Oparanya has called on the National Government to move with speed and charge individuals behind the current widely spoken about scandal at the Ministry of Health Services where Sh.5.3B is suspected to have been misappropriated.

Speaking on Friday at St. Kizito Lusumu Catholic grounds in Navakholo Sub-County, Governor Oparanya lamented about the delayed disbursement of free maternal funds from the national government to counties challenging the top leadership of the country to act swiftly and have all the suspects behind the scam brought to book.

Governor Oparanya, who was accompanied by his Deputy Hon. Prof. Philip Kutima, Navakholo MP Hon. Emmanuel Wangwe, Hon. MCAs, Executive Officers among other leaders, gave cheques, Sh5Million to Namirama Girls Secondary School for refurbishment after a dormitory and some classrooms were brought down by fire last year, Sh3Million for upgrade of Ematiha Dispensary and Sh.10Million for construction of St. Kizito Lusumu Girls School. Girls will be separated from the boys once the project is complete. Oparanya appreciated the efforts made by Hon. Wangwe by buying the land on which the girls school will be put up by the county government and added that he will bring Sh.10Million more to the school before the end of this financial year so as to make the institution a center of excellence.

Governor Oparanya, after inspecting Sivilie secondary school and commissioning Kochwa primary school ECD classrooms, winded up his day in Navakholo with a stop-over at Malaha market where residents praised him for maintaining a top gear on county development.

Meanwhile, earlier in the day, CECM for health Services Peninah Mukabane led county medical staff, patients and Kakamega town residents in commemorating the World’s Mental health Day at the county general Hospital. The Minister was pleased with the work being done by health practitioners who handle the patients in ward 9 at the facility and announced that the patients are today supplied with improved effective drugs. Mrs. Mukabane called on residents to treat the mentally challenged people with the respect they deserve by ensuring they get timely medical attention.