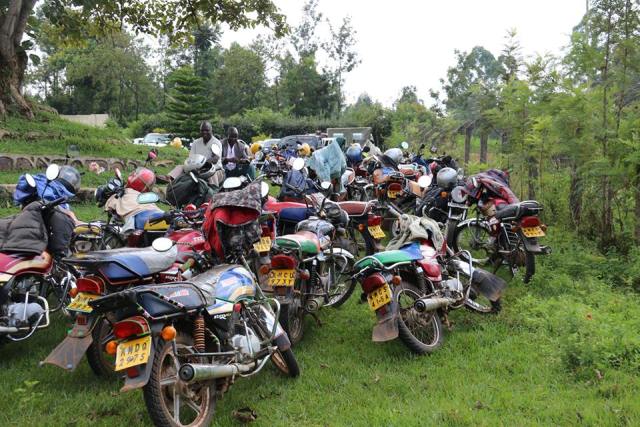 Bodaboda riders in Kakamega County stand better chances of beneffitting from the government’s programs among them, Mikopo Mashinani, One Cow initiative, Kazi Mashinani, Indiginious Paulty farming, Fish farming, 10km roads per ward, subsidized farming among others. These can be realized if the riders operate in Sacco’s and corporatives.

Speaking on Sunday at Shembekho grounds in Matungu Sub-County while addressing leaders of bodadoda riders from the constituency, Kakamega County Governor H.E Hon. Wycliffe Ambetsa Oparanya said the government will recognize and empower the newly formed Matungu Bodaboda Corporative to benefit its members and the residents at large. Governor Oparanya urged other bodaboda riders in the other 11 sub-counties to form corporatives and register with the government so as to be identified in the county’s jua kali sector. The Governor added that this will also help curb insecurity and crime in the bodaboda sector across the county as the leaders will work closely with the police and among themselves across the county to nub motorcycle thieves.

Governor Oparanya asked the riders to join county polytechnics for other skillful training in part-time classes so as to be self reliance and make bodaboda business an additional revenue earner. The Governor asked the riders to engage the government in their programs through the established structure for them to work within the law and for ease communication and implementation of county policies. Governor Oparanya announced the government’s plan to visit all Bodaboda groups across the county.

The Governor said the government will continue training bodaboda riders and get them licenses and certificates on successful completion of their courses. Oparanya challenged the riders to focus on viable business in the transport industry by acquiring buses through their corporatives. The Governor asked the riders to help the government in monitoring the ongoing construction works on the recently commissioned 10km roads per ward, being the immediate users of the roads, so as to have quality all weather roads in the county.