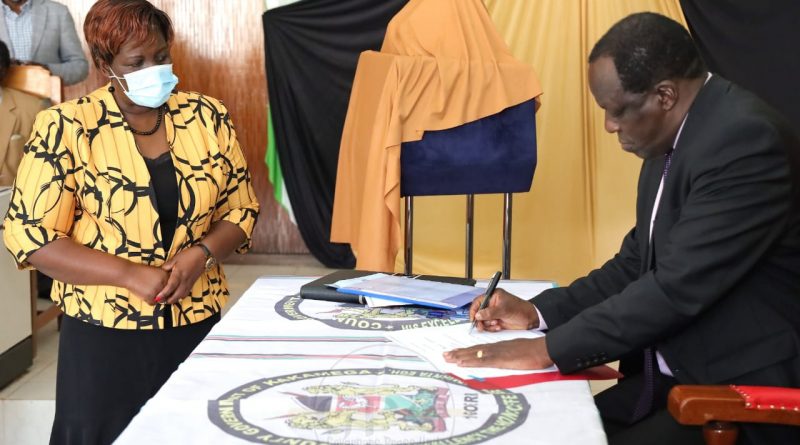 He said the ongoing projects should be completed before end of his tenure.

“Resources allocated to the county should be used for the completion of projects before starting new ones,” said Governor Oparanya.

He noted that he will personally monitor the progress of the projects and implementation of his directive on projects.

Speaking during the signing of performance contracts by senior County staff the Governor lauded the departments for their exemplary performance in the report.

“Today we have released results for Cycle 4 of the performance contract and I would like to congratulate the Public Service Board for clinching the best performing department,” he said.

He urged the County officers to ensure proper absorption of funds by implementing projects that benefit the public.

“We are still having a challenge of documentation and I urge everybody to ensure proper documentation is done in their respective departments,” the Governor said.

Deputy Governor Prof Philip Kutima acknowledged those departments that have improved performance over the years and urged them to focus on excelling further.

“I wish to applause those departments and entities that have excelled and urge them to better these results further.” Said Prof Kutima.

Madam Rodah Masaviru CECM for Public Service and County Administration thanked individuals who worked around the clock to the success of preparing, vetting and evaluation of the performance contracts exercise.

In the released report Public Service Board clinched first position followed by Public Service and Administration and the department of Education at number three in the best performing departments.