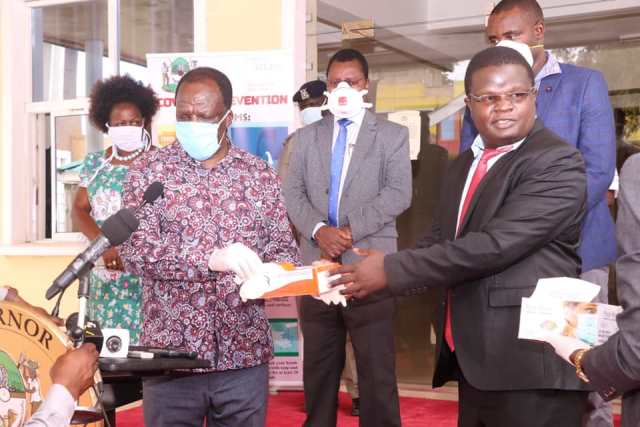 Governor Wycliffe Oparanya has announced that all health workers will receive incentives in their fight against Corona Virus (Covid-19).

While addressing media today at the County Headquarters, he revealed the plans by the county government in the war against the disease.

“Today we held a cabinet meeting and agree to give all health workers incentives to boost their morale in the fight against corona virus.
They are our number one army in this fight,” said Governor Oparanya.

He noted that recruitment exercise for healthcare workers is in progress and those who will be hired will have a three year contract.

The governor also extended the leave days by 15 more days for county staff who are not offering essential services.

He revealed that the county government has enhanced screening on people in the county and so far 47,372 people have been screened.

“We have turned the car park at Bukhungu Stadium to be used for fumigation of passenger vehicles. 400 vehicles have complied and I urge matatu saccos to encourage their members to support the exercise,” he said.

The programme targets to reach 100,000 households in Kakamega County by supplying them with 1 kg bar soap to households per month for the next four months, create awareness about Covid-19 in the county and also support efforts to disinfect different areas by providing disinfectants.

MEANWHILE, Kakamega County political leaders have come together in what can be seen as a spirited move to cushion the residents from the looming effects of the virus on the country’s economy.

Speaking Thursday afternoon at the County headquarters Kakamega, in the presence of H.E. FCPA Governor Wycliffe Ambetsa Oparanya, Kakamega senator Cleophas Malala called on the County Assembly of Kakamega to urgently re-convene for a special sitting to discuss re-direction of all domestic and international travel budget to the Covid-19 kitty.

“I would like to urge the honourable members to re-allocate those funds so that we can set up a food reserve for the County in preparation for this pandemic,” senator Malala said.

Ikolomani MP Benard Shinali who is also the chairman of the Kakamega County MPs Caucus said he had personally set aside Ksh. 1.2 million towards the Covid-19 County kitty. Hon. Shinali called on residents to strictly adhere to the guidelines spelt out by the Ministry of Health adding that Kakamega leaders were fully behind the County Emergence Response team chaired by Governor Oparanya and co-chaired by the County Commisioner. His sentiments were echoed by County MP Elsie Muhanda who has already begun a mask distribution campaign to residents.

County Commissioner madam Pauline Dola cautioned residents to avoid high risk areas such as open air markets. She reminded members of the public that law enforcers were under strict instructions to ensure no one contravenes the guidelines given by the Ministry of Health.

During the event, the Governor flagged off a convoy of trucks packed with sanitizers, soap and masks headed for other counties in western and Nyanza regions.