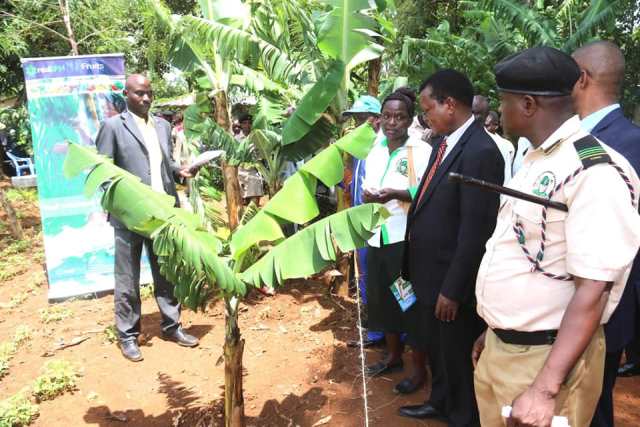 Speaking during the event held at a farmer’s farm at Vuyika village, Chevaywa ward, Lugari sub county, Kakamega County, deputy governor H.E. Philip Museve Kutima called on farmers to embrace modern farming techniques advanced by the county government to increase productivity. He reminded them to diversify agriculture by engaging in dairy & poultry farming as well as fish farming in addition to crop farming. “Dairy farming is now picking up in the county and is expected to be more lucrative once Malava Dairy plant has been constructed and operational,” he said. He called on them to register early enough for the county government provided subsidised inputs and mechanized machines to avoid a last minute rush by them and to enable the government plan promptly for delivery and storage of the farm inputs. He announced that the government has moved with speed to ensure the supplier of fertilizer delivers the important farm inputs on time.

Agriculture and Livestock Chief Officer Jeremiah Namunyu called on the farmers to embrace farming to ensure Kakamega county is food secure. This year’s theme has been “Our actions are our future. A zero hunger world by 2030 is possible”

In attendance also was Chief Officer Livestock Production and Fisheries development Dr. Kelly Nelima, Members of County Assembly led Agriculture committee Chairman Geoffrey Omumatera, directors of agriculture and other senior officials from both the national and county governments among others.