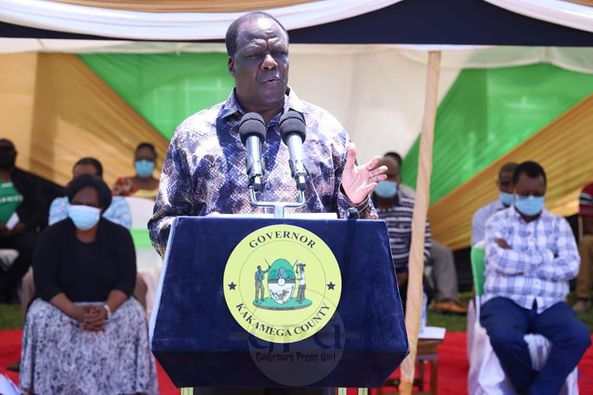 The County Government of Kakamega and the National Government will work closely together to end the perennial road accidents along the Eldoret-Webuye highway.

This was announced Sunday by Kakamega Governor Dr. FCPA Wycliffe Ambetsa Oparanya, during a prayer service meeting at Maturu Primary School, Luandeti ward, Lugari Sub-County, organized by the County to pray with and support the families of the road accident which occurred at Mukhonje market center along the highway, killing 5 people.

According to findings by a multi-agency Taskforce constituted by the Governor to unearth the cause of the accident, the major contributors were; lack of road signs due to vandalism, over speeding, business activities along the highway and irregular bus stops among others. The tragedy involved four vehicles and a Kenya Power and Lighting Company transformer.

The Governor called on the Agencies tasked with Implementation of the report to expedite the process and warned residents living along the highway against vandalising the road signages. Dr. Oparanya revealed that the Kenya National Highways Authority (KeNHA) will immediately begin construction of speed calming rumble strips as part of the recommendation to address the accidents.

“In collaboration with the police, the Committee has also recommended installation of speed cameras to arrest rogue drivers,” he noted adding that the County Government will purchase land in the area and relocate the traders. Warning signs indicating Danger ahead, No free gear, 50km speed limit at the shopping centre to be restored, preferably using plastic materials to make them less attractive to vandals, the Governor said.

The County boss also instructed the CECM for Roads, Public Works and Energy Mr. Geoffrey Omulayi to ensure security lights are installed along the highway from Mukhonje market centre to Kaburengu within two weeks to enhance night vision by motorists and other road users.

“Disaster is cross cutting hence the need to cooperate to make sure we avert such incidents, which leads to loss of lives and property, in future,” he said.

The Governor also used the opportunity to encourage residents to visit the nearest Level IV health facilities to receive a Covid-19 jab. The County, he announced, has received 53,000 and 18,000 doses of Johnson and Johnson and Moderna vaccines respectively.

During the meeting, affected families were assisted financially by the County Government as well as the traders who lost property. The two families from Kakamega County that lost their loved ones received Ksh 100,000 each as the three others from other counties received Ksh 50,000 each. Business people received Ksh 20,000 each to assist them to restart their businesses.