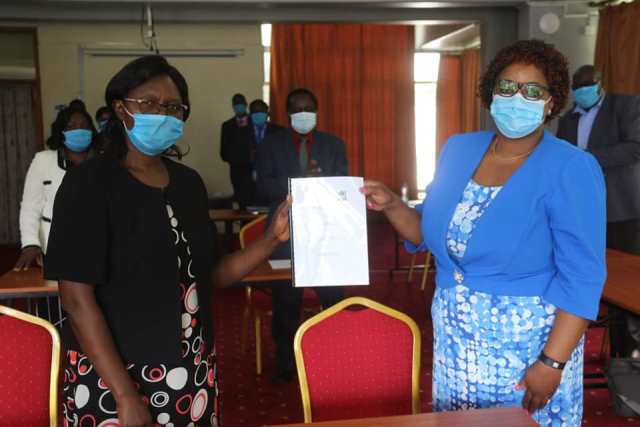 Members of the Kakamega County Public Service Board Wednesday afternoon witnessed the signing of a 2020/21 Perfomance Contract (PC) document between the Chairperson madam Catherine Raini Omweno and the board’s Chief Executive Officer (CEO) Ms Catherine Otenyo in a brief ceremony held at Golf hotel, Kakamega. The CEO on the other hand signed the key perfomance measurement tool with the secretaries to the various committees at the board who would later on cascade the document further to other staff.

Governments, public institutions, private organizations and many other employers world wide have embraced performance contracting as a critical component of managing service delivery among staff.

Speaking during the brief function, the Chairperson of the Board madam Omweno said the PC tool will guide the staff on government expectations in terms of service delivery to the people of Kakamega County.

“I am very elated to witness this important exercise at the begining of the financial year because often at times PCs are signed at the end of the year,” she noted.

Madam Omweno exuded confidence that the tool will turn the plans of the board into actionable targets and called on staff to appreciate the key role played by the board in human resource and public service by redoubling their efforts while on duty.

Her sentiments were echoed by the Vice Chairperson of the Board, CPA John Subai, who challenged staff to set targets that will be emulated by other departments in the entire Government system.

Dr Ralph Wangatia the Chairman of the Training & Development Committee which houses Performance Management systems said the document will bring to focus the utilisation of resources including time management in the County.

“Our work will also be measured in terms of what is being achieved, the output and the service delivered to the residents of this great county of Kakamega,” he stated.

He called on staff to exercise responsibility, team spirit and accountability at work.

Other board members in attendance were madam Sylvia Otunga, Mr Stanley Were and Mr Joel Omukoko.

Dr Vincent Motochi, madam Pamela Situma and madam Lucy Kihamba from the secretariat were also present among other officers.