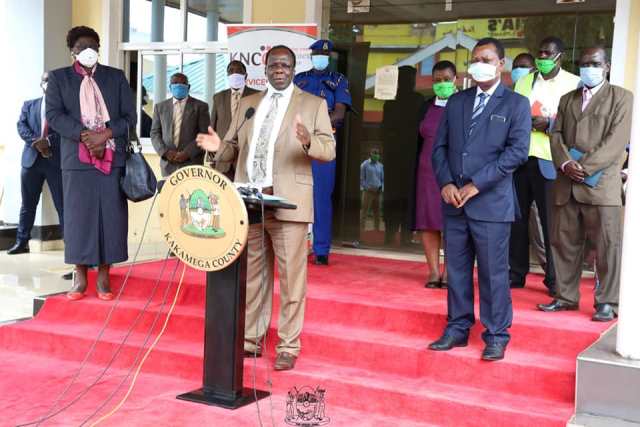 H.E. Governor Wycliffe Ambetsa Oparanya Monday evening announced that the county will purchase one million masks to be distributed to vulnerable members of the society and healthcare workers in Kakamega County.

According to the governor, who is also the Chair of the County Emergency Response Team, 600,000 re-useable masks will be distributed to vulnerable people while the remaining 400,000 will be given to healthcare workers. The governor explained, that the masks are meant to fill the current gap being experienced in the County.

“We have already bought 40,000 disposable masks and 2,000 re-usable masks for healthcare workers involved in the fight against Covid-19,” he said.

The County boss was speaking at the County headquarters when he received a donation from the Kenya National Chambers of Commerce and Industry (KNCCI) – Kakamega Chapter.

Governor Oparanya issued a stern warning to residents who defy the directive to wear masks in public places saying they risk being arrested and taken to quarantine at their own cost.

He said all market goers must from today henceforth wear masks and directed security and enforcement officers to ensure the order is enforced.

“Markets are our weakest links in this fight against the spread of corona virus; no one will be allowed to set foot in any market without wearing a mask as one way of combating the spread of Covid-19,” he said.

The governor noted that the county will also control inter-county trade as a measure of limiting movement of people inorder to prevent the spread of the virus into the county from other regions.

“Roadblocks will soon be mounted at every entry point for screening of people coming into the county to help combat the spread of this virus,” he said.

He launched a County Donation Fund that will assist in sourcing for finances and food supplies to cushion the most vulnerable members of the society in the event of a lockdown in the country and appealed to donors and other well-wishers to support the programme.

The governor further announced that the County Emergency Response Committee has formed three sub-committees namely;
i) Public Health sub-committee that will be chaired by MMUST don Prof. John Okoth,

ii) Donations and Resource Mobilization sub-committee under the stewardship of Deputy Governor Prof. Philip Museve Kutima,
and the;

iii) Finance and Logistics sub-committee to be headed by Mr. Geoffrey Omulayi, the CECM in charge of Finance.

The initiative will be cascaded further to the sub county and ward level.

“Masinde Muliro University of Science & Technology (MMUST), Kakamega School and the Kenya Medical and Training College (KMTC)-Kakamega have been identified as the main isolation centers for the county,” governor Oparanya observed.

MMUST and Kibabii Universities have been included in the County Emergency Response Committee to help in the fight against the pandemic due to their research and technical expertise.

The KNNCI-Kakamega Chapter donation presented by the chairman Wycliffe Kibisu included; two 240 litres of sanitizer to be distributed to Bodaboda riders and sub county hospitals, water buckets for hand washing and 12,000 masks among others.