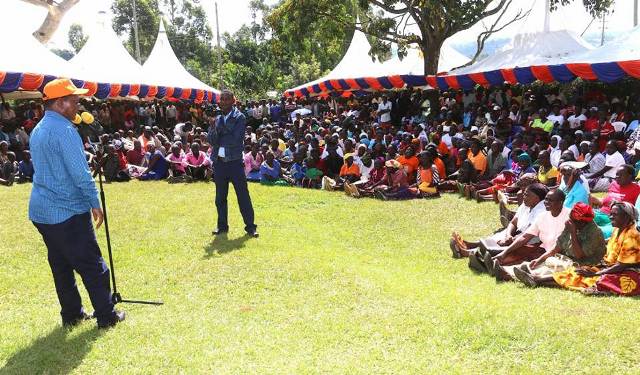 DEPUTY Governor H.E. Prof. Philip Museve Kutima has called on the Ethics and Anti Corruption Commission (EACC) and other government agencies to crackdown on illegal sugar importation in the country perpetuated by barons.

Speaking during an Orange Democratic Movement Party (ODM) housekeeping meeting with over 2000 party members, where he is county party chairman, Prof. Kutima blamed the problems facing the sugar industry in the county and beyond on sugar barons and cartels engaged in illegal importation. He called on law enforcement agencies to step up their efforts and bring the culprits to book. Prof. Kutima also criticised politicians defending illegal sugar importation referring to them as self seekers who lack the interest of the local farmers at heart. He however urged farmers and residents to exercise restraint and allow government agencies to carry out investigations into the illegal sugar importation.

Kakamega County Assembly deputy speaker Hon. Leonard Soita Kasaya called on leaders and residents of Kakamega to rally behind H.E. Governor Wycliffe Ambetsa Oparanya and his deputy Prof. Philip Museve Kutima as they work towards fulfilling their promises to the electorate as promised in their manifesto.