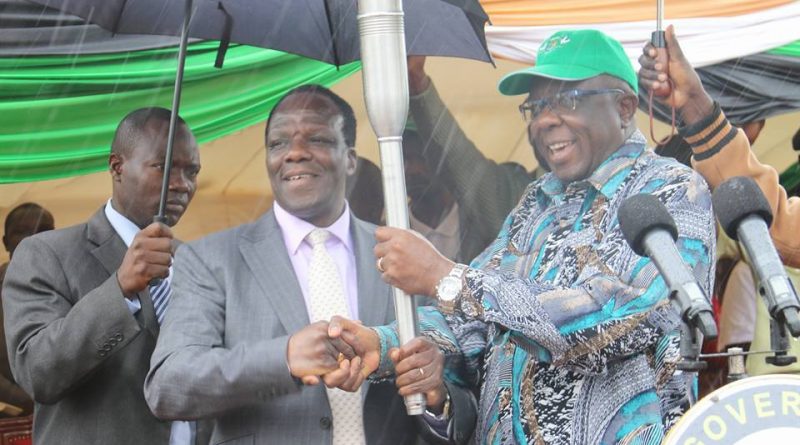 Kakamega County Governor H.E Hon. Wycliffe Ambetsa Oparanya on Thursday hosted his Vihiga counterpart H.E Hon. Moses Akaranga on a day that saw the devolution torch land in the county in style after a three day tour across Vihiga county.

The hand over ceremony of the torch from Vihiga to Kakamega was held at Lusui in Ikolomani Sub-County at 1pm where the visitors were received warmly by the host as Isukuti dance reigned in the air. The procession thereafter headed to the under construction Kakamega County Teaching and Referral Hospital, then to Bukhungu Stadium and a lap around Kakamega Town center before finally landing at the County Headquarter. The two Heads of Counties, while addressing the public and the media, narrated successes of devolution at the grassroots.

Governor Oparanya thanked all the residents of Kakamega County for their proactive participation in matters pertaining devolution, saying today his government goes all the way to the ward level from the former single office situated in Kakamega town. The Governor encouraged the residents to participate fully in the on-going exercise of establishing village and community boundaries saying this will bring to life a fully fledged government where mwananchi can enjoy important services just at their doorsteps.
Governor Oparanya thanked the judiciary for ensuring that devolution matures despite many challenges faced by Governors from different opposing ends.

Governor Akaranga on his part said a lot has been achieved in all the sectors, especially the devolved functions, and challenged senators to appreciate and help Governors in upholding devolution, rather than criticizing even the obvious. The Governor lashed at the national government over the reported graft in the Ministry of Health and called on relevant government agents to act swiftly and apprehend all the masterminds of such mega theft.

The devolution torch will be taken round all the 12 sub-counties of Kakamega from Friday, Saturday and wind up on Monday at Eshikulu in Likuyani Sub-County where the government of Kakamega will hand it over to Trans-Nzoia government. Residents are urged to take part in appreciating the fruits of devolution as the torch moves around the county.

On Saturday, the devolution torch caravan will go to Butali for a stop over at Butali Market – Nambacha Market and Malava Hospital for the OparanyaCare Program before returning to Kakamega town.