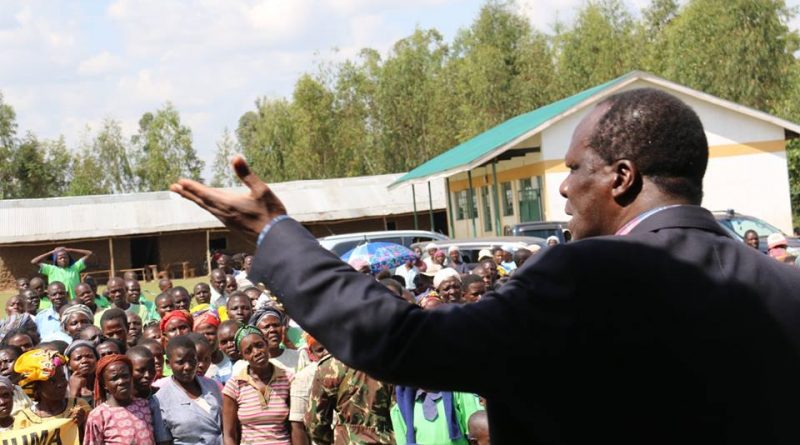 Kakamega County Governor H.E Hon. Wycliffe Ambetsa Oparanya has challenged elected leaders to respect their electorates warning that they risk being judged harshly next year at the ballot. Speaking at Kandai Primary School in Khalaba Ward, Oparanya was bitter with most elected leaders from the county whom he said survive on drama, pretence and malice as they take advantage of funerals in the county to please the public with no single development records. Governor Oparanya was in Kholera and Khalaba Wards in Matungu Sub-County yesterday to complete a public participation function that he started in the constituency last week where he visited Mayoni, Namamali and Koyonzo Wards.

Speaking at Bulimbo Primary in Khalaba Ward, Governor Oparanya asked Kakamega residents to begin rating all the leaders they voted in in the last general elections against their performance on ground according to their individual elective offices.

The Governor’s itinerary started with commissioning of ECD classrooms at Bulimbo primary school before proceeding to Busombi Muslim Girls Secondary, Kandai primary and Lutaso primary schools where he inspected government projects and opened classrooms and ECD centres. While at Lutaso grounds, Governor Oparanya gave two blankets and a mattress to 12 beneficiaries of the Shelter program, who already have been built houses by the county government. Khalaba Bodaboda (Khalaba Ward) and Bulala Innovators (Kholera Ward) Youth Groups each received a water tank of 1,500 ltrs capacity and moneymaker water pumps.

The Governor was accompanied by County Executive Members, Hon. MCAs, Nominated Senator Godliver Omondi, among other leaders. Governor Oparanya will today be in Ikolomani Sub-County where he is expected to commission several government projects and award cheques.