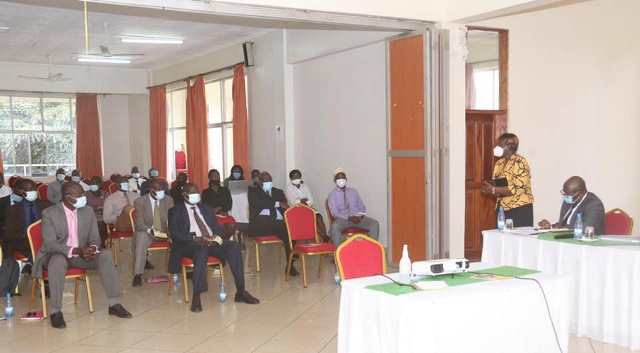 The Kakamega County Executive Committee Member (CECM) for Finance, Economic Planning and ICT Dr. Beatrice Sabana has called on County Government Accountants, Procurement officers and Auditors to improve on their style of financial reporting, documentation and general work operations.Dr. Sabana said this on Thursday at Golf hotel Kakamega, during a training workshop for Accountants and Hospital Administrators in the ongoing five day capacity building exercise for senior and middle level Government officers.The officers have been undergoing an intensive training in financial management facilitated by a team of Auditors from the Directorate of Internal Audit at the National Treasury. The experts are led by a seasoned public servant Mr. Willis Okwacho.Dr Sabana urged the officers to get out of their comfort zones and fix all the weaknesses to promote a more efficient and functional County Government system.The Finance CECM had on Tuesday challenged Procurement officers to enhance efficiency at their respective workplaces when she noted that the Department is one of the most critically ill units in her Ministry where most Government services commitments are initiated. She said most of the audit queries in Government revolve around Procurement and reminded the officers to observe high levels of professionalism while on duty. “Your errors of commission or omission will no longer be shouldered by H.E the Governor in various Committees like the Senate’s PAC, as has been the norm, but by individual persons who commit those mistakes,” she stated.The County Executive reminded the officers that the transactions they carry out on a day to day basis should be supported by law and called on them embrace consultations by reaching out to celebrated and accomplished Accountants in Kakamega County, Governor Oparanya, a Fellow Certified Public Accountant included, in offering quality services to residents and other clients.Chief Officer for Finance CPA Amb. James Ochami noted that the objective of the exercise is to establish the causes of loopholes in financial management with the aim of instituting proper mechanisms of managing financial operations within the Government. In attendance were County Head of Supply Chain Management Mr. John Koveti, Head of Financial Reporting CPA Dennis Lusuli, Deputy Director of Internal Audit CPA David Mboya among other officers.