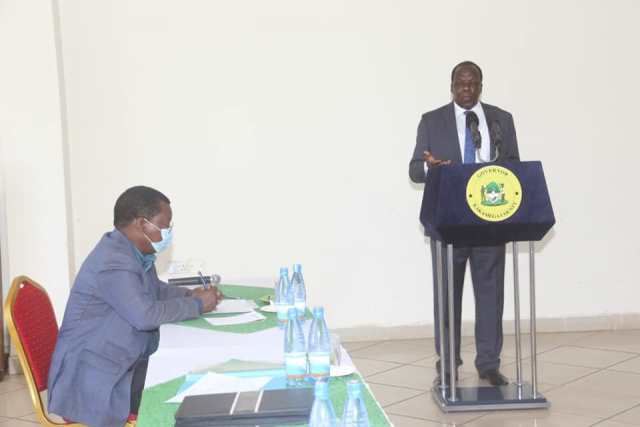 Government officers have been reminded to observe proper procedures and policies while utilising public finances. This was said on Monday by Kakamega Governor H.E FCPA Wycliffe Ambetsa Oparanya during a Management training for senior Government officers in the public sector at Golf hotel, Kakamega. The objective of the workshop is to train the officers in good Governance and Financial Management. In his opening remarks, Governor Oparanya observed that as custodians of public resources, the officers need to institute strict measures that will guard against misappropriation and theft of funds adding that regular reporting is key in management as it assists in correcting malpractices.”This training should assist you (officers) to enforce proper controls in your Departments as required by law; as you do so, l do not expect you to make any financial commitment individually as it is a collective responsibility,” he advised. The trainers are in Kakamega following an invite from the Governor and are expected to take the officers through a five day intensive training in Accounting and Reporting, the Role of Internal Audit unit and the Audit committees in promoting Financial Responsibility as well as the Management of Expenditure and Control among others. Deputy Governor H.E Prof. Philip Museve Kutima called on the senior officers to update their knowledge on the Public Finance Management (PFM) Act so as to remain abreast with what is expected of them in financial control.Finance, Planning and ICT CECM Dr. Beatrice Sabana who is the convener of the workshop on her part noted that the training will enhance prudent utilisation of finances and accountability among officers.Finance Chief Officer Amb. James Ochami highlighted the need for the Internal Audit team to carry out timely audit, regular Review of financial operations and provision of timely reports by officers to the relevant oversight bodies as required by law as some of the key recommendations raised during day one of the workshop.The facilitators led by Mr. Willis Okwacho are from the National Treasury, Internal Audit Unit. Also in attendance were CECMs, County Secretary and Head of Public Service Madam Jacinta Aluoch Odhiambo, her deputy Mr. Joshua Kutekha, Chief Officers, Advisors, Ag. County Attorney Vivianne Mmbaka, CEOs, Heads of Departments and other senior Government officers.Internal County Auditors, Accountants, Planners, Sub-County Administrators among others are also expected to attend the workshop.