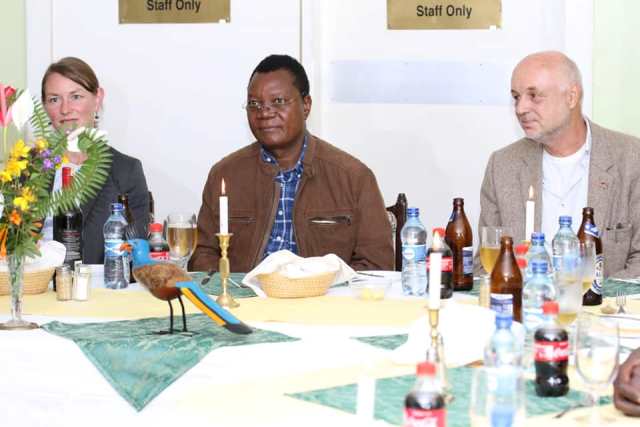 Deputy Governor H.E. Prof. Philip Museve Kutima has lauded the close working relation between the county government of Kakamega and her development partner German Development Cooperation (GDC) terming it very beneficial to the economic well being of the residents of Kakamega county. He was speaking during a dinner party hosted by the development partner (GDC) Thursday evening at Rondo retreat, Kakamega, in the presence of Marie-Lena May a Senior Policy Officer for Kenya working with the Federal Ministry for Economic Cooperation & Development.

Prof. Kutima who passed apologies of H.E. FCPA Governor Wycliffe Ambetsa Oparanya who is on official duty at the United Nations General Assembly (UNGA) in the United States of America, said the county has focussed on the farm inputs programme, dairy development, aquaculture development and farm mechanization among others as some of the flagship programmes in the agricultural sector.

On her part, Madam May thanked the county government of Kakamega for the good investments with the funds provided by the German Development Cooperation. She encouraged youths to shun drug abuse and instead embrace farming as a way of creating employment.

The event was also attended by Chief Officer for Agriculture Mr. Jeremiah Namunyu as well as his Livestock & Veterinary Services counterpart Dr. Kelly Nelima, Dr. Mathias Brown-GIZ Director for Agriculture programme, County Director of Agriculture Johnstone Imbira and Mr. Luke Otipo, administrator in the office of the deputy governor among others.