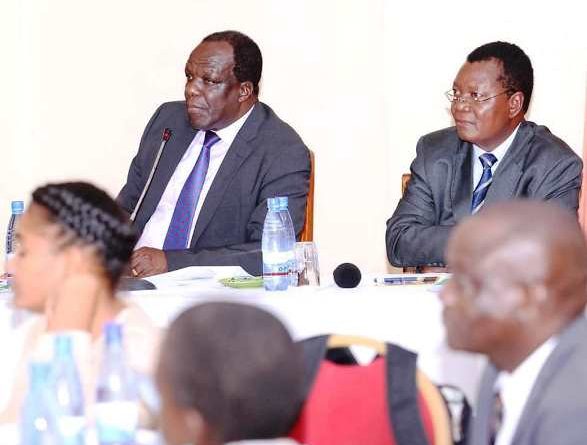 “Money collected in form of tax should be taken back to the people to fulfil the spirit of “a government of the people for the people, by the people,” as coined by President Abraham Lincoln.

This is according to H.E. Hon. FCPA Governor Wycliffe Ambetsa Oparanya.

The Governor made the remarks during the county weekly revenue meeting at Golf Hotel, Kakamega attended by senior government officers including CECMs, Chief Officers and senior officers from the Kakamega Revenue Agency among others.

“Very soon some privileges enjoyed by government officers such as allowances will be a thing of the past if recommendations made during the wage bill workshop by various stakeholders among them county and national governments sail through,” he said.

The Governor added that some of the submissions to the Building Bridges Initiative (BBI) committee of experts now in the public domain also suggested the need for the government to reduce expenditure This within itself as an austerity measure to cut down on the ballooning wage bill.

Governor Oparanya observed that the national government, for instance, spends most of the tax collected on salaries and donor debts repayment, leaving very little or no funds at all for development.

The CoG chair also said he had advised the national government to review its governance structure as a way of ridding its system of employees who earn salaries with no work to show.

Governor Oparanya reiterated his earlier directive that all pending bills be cleared in the shortest time possible and regretted that some service providers were at the mercy of some financial institutions for non-compliance to the terms and conditions of loan repayment despite offering a service to the government.

He in turn warned government employees who demand kick-backs from service providers of dire consequences if found guilty of such an offence.