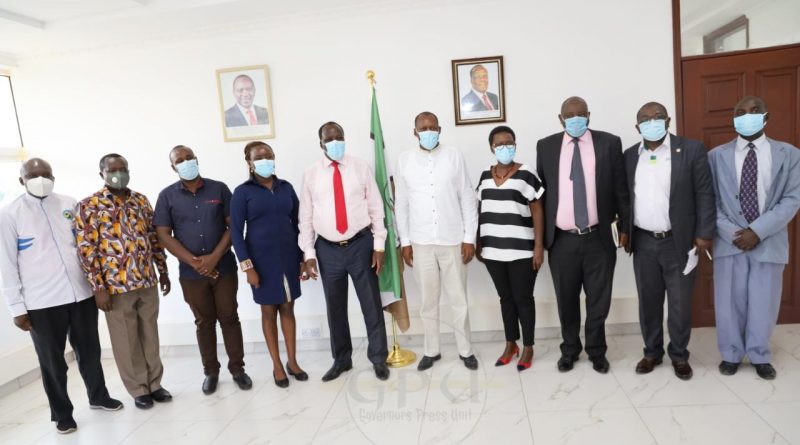 Governor Dr Wycliffe Oparanya says the National Government has frustrated efforts by the County to fence Kakamega forest to serve as a tourist attraction facility.

He said the Ksh 400 million project has been scuttled by officers in the National Government who have failed to play their role to make it a success.

“We have had plans to fence Kakamega forest with intentions of getting gorillas from Congo forest so that we make the forest an attraction facility but these plans have been frustrated by some officers in the National Government who have looked down upon this noble idea,” said Governor Oparanya who was accompanied by Mr Alfred Matianyi CECM for Trade, Tourism and Industrialization.

Speaking during a meeting with a team from Tourism Fund who paid him a courtesy visit in his office, he said the project was going to be a game changer for tourism in the region as it could be one of key sources of revenue for both the National and County Governments.

He revealed that one of the NGOs in the country had agreed to pump Ksh 156 million in the project.

He noted that Vihiga County had also agreed to contribute Ksh 20 million towards the project.

“The project could have taken three years to complete. We have already allocated Ksh 100 million for the project but up to now it is yet to be implemented,” he said.

“Our meetings with Kenya Wildlife Service and Kenya Forest Service to have the project commence have never been fruitful,” he said.

Dr Oparanya also raised concerns that the National Government also frustrated efforts to start a snake park in the County.

He challenged Tourism Fund to partner with the County to construct a four or five star hotel and a convention center in the region saying the County Government is willing to provide land for the projects.

“This region lacks a five star hotel yet it has a high population and potential. We are ready to partner with Tourism Fund and other stakeholders to have a four or five star hotel in this region,” the Governor said.

Mr Alfonse Kioko chairman of Tourism Fund regretted the frustration promising that they will intervene to have the project implemented.