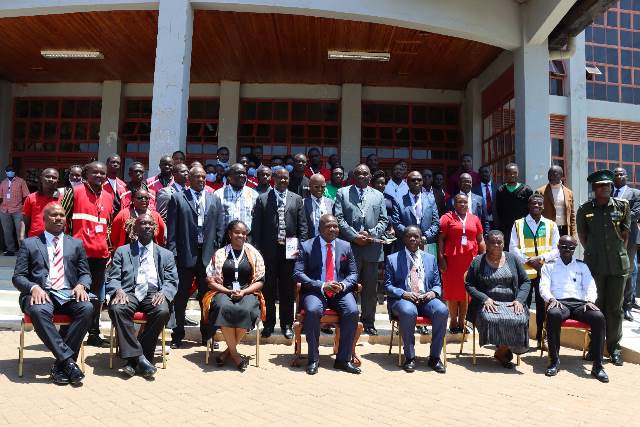 H.E FCPA Fernandes Barasa, the Governor of Kakamega County, Tuesday graced the 2022 International Day for Disaster Risk Reduction (IDDRR) with a call to action to stakeholders among them institutions of higher learning to support concerted efforts by his Government to construct, equip and operationalize County Disaster Operation Centers.

Governor Barasa made the remarks when he presided over this year’s National event themed Early Warning, _Early Action for All_ hosted in Kakamega County at Masinde Muliro University of Science and Technology (MMUST) where he implored stakeholders such as the National Government, MMUST, UNDP, World Vision, UN Women and Kenya Red Cross to support the County Government in operationalizing Disaster and Emergency Operation Centers in the Central, Southern and Northern regions of the County to effectively respond to calamities that may occur, in a timely manner.

“In addition to building the three centres, we also intend to increase the allocation for disaster preparedness in order to realize our goal of decentralizing Disaster Risk mitigation measures upto the grassroots,” the Governor explained adding that Kakamega is prone to disasters such as lightening, mudslides, collapse of goldmine walls, floods and road traffic accidents among others.

FCPA Barasa regretted that Western Kenya, the country’s breadbasket has in recent times been hit with a serious attack on crops by the fall armyworms due to a prolonged dry season and climate change and warned of a looming hunger not only in Kakamega but the entire country. He called on institutions of higher learning to conduct research with an aim of mitigating the adverse effects of disasters in the County.

The County Government, the Governor added, has four functional fire engines and is in the process of procuring two more for quick response to fire and related disaster cases. Capacity building for County fire fighters and paramedics, he mentioned, has also been stepped up to equip the officers with the relevant skills.