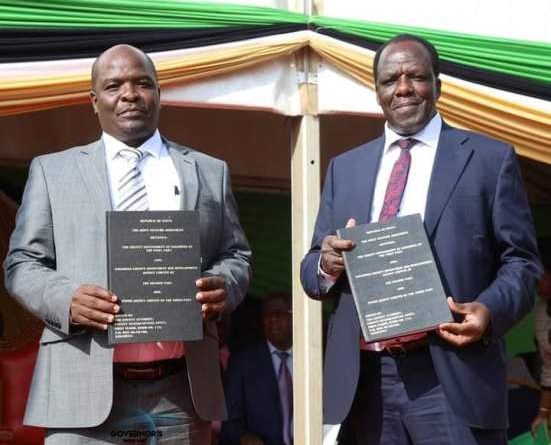 The County Government of Kakamega has partnered with Pinnie Agency Limited, a private developer, to deliver over three thousand housing units in Kakamega County.

The developer signed a Joint Venture agreement with the County through Kakamega County Investment and Development Agency (KCIDA), which is a special purpose vehicle, established by an Act of the County Assembly of Kakamega in 2018 whose mandate includes and not limited to entering into partnerships with both private and public sectors in order to promote investment in Kakamega County.

Once completed, the project that will be executed in three phases is envisaged to increase housing stock in Kakamega and improve the living conditions of the residents.

Speaking during the launch at Mudiri grounds in Lurambi Sub-County, Kakamega Governor H.E Dr. FCPA Wycliffe Ambetsa Oparanya revealed that public servants will be given priority during allocation of the units with a 70 percent share as the remaining 30 percent goes to members of the public.

Dr. Oparanya noted that demolition of the old Mudiri Estate blocks conformed to the procedures as required by the relevant Government agencies such the National Environmental Management Authority (NEMA).

“As we work towards elevation of Kakamega Municipality to a city, we have to ensure correct measures are put in place in various sectors such as Housing, Infrastructure, Water, Sanitation and Sewerage among others; all these will be key as we prepare for Kakamega as the 5th city in Kenya,” the Governor observed.

The County boss explained that public servants will access the houses through a mortgage scheme while other members of the public will be allowed to buy and/or rent the houses to generate income for the Government.

“These houses will stabilize house rent in Kakamega and other urban centres and reduce exploitation of tenants by private house owners,” he said and called on the contractor to source for construction material and labor force locally.

The Chairman of Development Consortium and Pinnie Agency Limited Group Mr. Shem Tai thanked the Governor for promoting investment in Kakamega County adding that the project has been cleared by NEMA.

Mr. Tai said they will also construct 54 four and five bedroom houses at Lubao, 702 mixed units at Old Airport and 602 mixed development units at the Mumias Triangle in Mumias Municipality.

The event was attended by senior Government officers from both levels of Government as well as other key project partners.