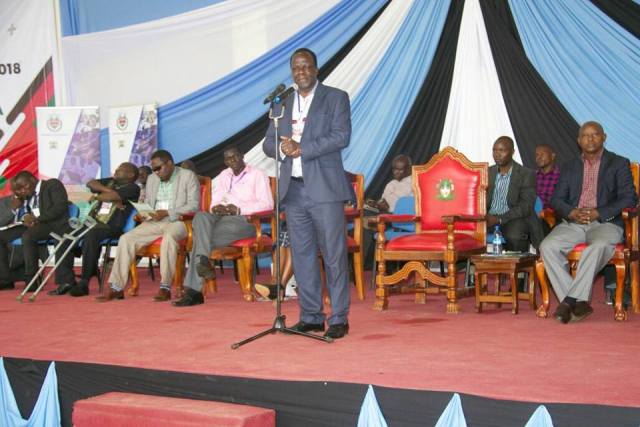 Speaking at the function, H.E Governor Oparanya called on the youths to realise the importance of the conference as it accords them a platform to engage among themselves and their leaders. The Governor encouraged them to get more involved in the government affairs as they are fully represented in his government by youths at the levels of CEC members, Chief Officers and Heads of Departments among others. He called on the delegation attending the conference to consider the less fortunate (uneducated and unemployed) youth’s who were unrepresented at the event. He advised them not to yearn for quick glory as success is a gradual process.

The Governor welcomed delegates from the entire country and beyond for the 5th devolution conference to be held in Kakamega from 23rd – 27th April 2018 adding that this is the first governors event to be held in a harmonious environment.

Nyeri County Governor H.E Mutahi Kahiga challenged the youthful delegates to go out of their way to seize opportunities.

Later in the day, H.E the Governor joined mourners including former premier Rt. Hon Raila Odinga in Shinyalu for the burial of the late Mama Regina. The late was the mother to Shinyalu Member of Parliament Hon. Kizito Mugalia. Governor Oparanya mourned Mama Regina as a devoted person who believed in development and empowerment of the society.