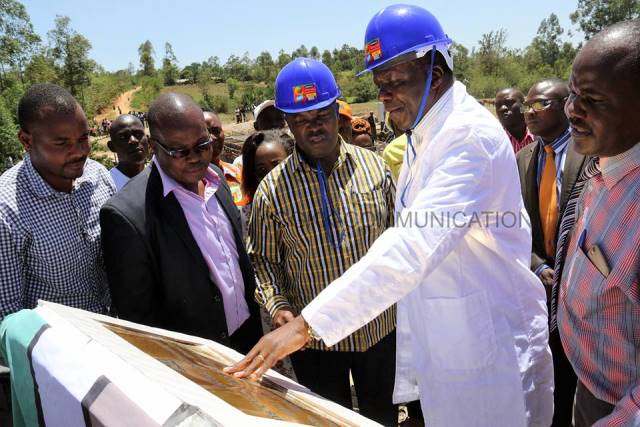 Governor Wycliffe Ambetsa Oparanya has urged residents of Kakamega County to keenly scrutinize leaders vying for elective positions in the forth coming general elections before entrusting them with the roles. Governor Oparanya was speaking today during his tour of Navakholo Sub-County on a project inspection and commissioning mission as well as voter registration drive. Governor Oparanya inspected Ebumangale Bridge that connects Lurambi and Navakholo Sub Counties, which is under construction by the county government. The existing foot bridge has rendered crossing of Isasala River impassable and connections between the two Sub Counties impossible especially during the heavy rains period. Governor Oparanya also commissioned a county government constructed dormitory at Ingotse Boys High School, a two storey classroom at Sivilie Girls Secondary School and a class room block at Buchangu Secondary School.

Governor Oparanya reminded residents of Navakholo that the education function is not fully devolved but the county government has moved in to assist institutions which lack the relevant facilities for the benefit of the school going children and Kakamega County education system growth. All these efforts are geared towards improving the standards of education in the county.

The Governor called on all residents to ensure they register as voters in the ongoing mass voter registration exercise in Kenya. Oparanya has made arrangements to have IEBC clerks in all government public participation forums to enable more people captured in readiness for the general elections this year.

All the speakers praised Governor Oparanya’s visionary leadership and urged residents to make smart choices in August this year when Kenya will be making her history through elections.