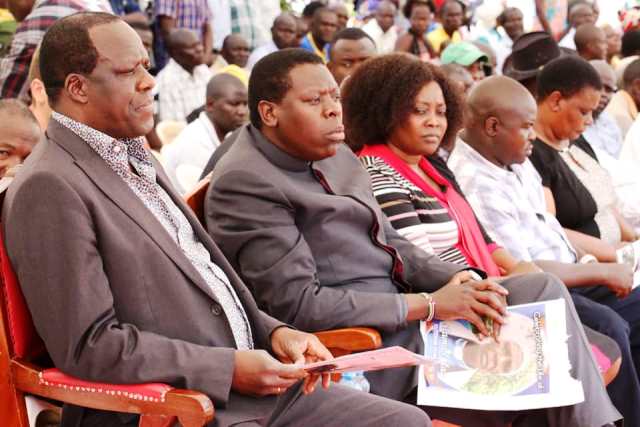 Kakamega governor and CoG chair H.E. Hon. FCPA Wycliffe Ambetsa Oparanya has said he has the will and credentials to lead the Luhya community to national leadership.

He said there were some leaders from the region who have been given a chance to lead many times before but they let the community down.

“The time to move on and try me is now and those leaders should not expect any more chances because it is a waste of time,” he declared.

The governor made the remarks in response to Cabinet Secretary Eugene Wamalwa’s appeal to Luhya leaders to forge unity and pick one of them to ascend to national leadership.

On his part, Kakamega Senator Cleophas Malala said wananchi should rally behind Governor Oparanya on the strength of his track record and Kakamega’s population.

The leaders were addressing mourners at the home of the MCA for Malaha Isongo Makunga ward, Hon. Lucas Radoli Ochami during the burial ceremony of his mother, the late Eglay Kutekha Ochami.

The governor conveyed his condolences to the Mumias East family which lost two children to drowning recently when a wooden bridge collapsed following heavy rains. The County government will build a permanent bridge in the area soon, he said. He also announced plans to unveil a strategy on the revival of the sugar industry in the County in which support for planting of sugarcane within one year will be in focus.

Commenting on the BBI debate, governor Oparanya said wananchi should have the final say on the future and outcomes of the BBI Taskforce’s proposals rather than the National Assembly.
He said the proposal to have a weak Prime Minister appointed by the President was ill advised and he will oppose it.