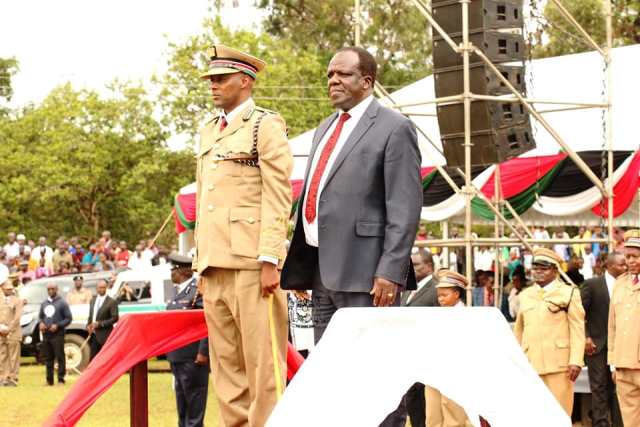 H.E. Wycliffe Ambetsa Oparanya has put criminal gangs in the County on notice describing their brutality against innocent members of the community as a shame to the society.

Referring to the recent killings in Matungu and Khwisero in which 14 people including children lost their lives, the governor said the County and national governments will work closely to stop the killers’ rampage.

Governor Oparanya made the remarks today during the County Madaraka Day celebrations at Bomani grounds in Mumias West Sub County.

The governor asked the gathering to observe a moment of silence in honour of attack victims.

“The killings are not different from those of terrorists who subscribe to killing innocent people,” he said.

Kakamega County Commissioner, Mr. Abdiruzak Jaldessa said the on-going security operation in Matungu Sub County had borne fruits. “The people of Matungu can now enjoy their sleep,” he said adding that the security operation was successful.

The Commissioner and Nominated senator, Hon Getrude Musuruve decried the high incidence of gender based violence against women in the County.

On the sugar sector crisis in Mumias, the leaders including Mumias East MP Hon. Benjamin Washiali and Nominated Senator Hon Shionga supported governor Oparanya’s recent intervention in Mumias Sugar Company with a view to protecting the company’s assets and reviving the factory.

H.E. Oparanya who is also chair of the Council of Governors said majority of Kenyans supported devolution despite efforts from a few people to undermine it.

“There is resistance particularly from the centre where all manner of tactics are at play to frustrate the system, he said.