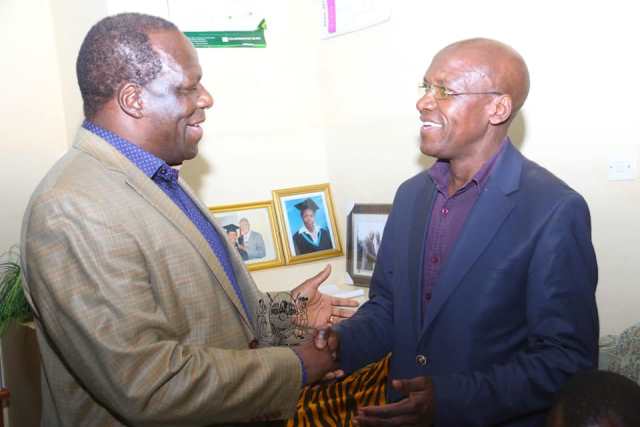 H.E. FCPA Governor Wycliffe Ambetsa Oparanya visited former Senator for Kakamega County Hon. Boni Khalwale at his Malinya home to condole with his family after the loss of his beloved wife mama Adelaide .

“The late Adelaide was a loving and dependable wife and mother to her family and a dedicated public servant at Masinde Muliro University where she was a member of staff ” he said.

The governor added that the county through the ministry of Public Service and Administration will give support to see that Mama Adelaide is given a decent send off.

Hon. Khalwale on his part thanked the governor for finding time to visit and promised his support to see that the governor delivers his development agenda before the end of his tenure.

The closed door meeting was also attended by the CECM for Trade, Industrialization and Tourism, Mr. Kassim Were who chaired the Mumias Sugar Company Taskforce on revival of the industry. The Chief Officer Service Delivery, Ambassador James Ochami, MPs Hon. Benjamin Washiali and Emmanuel Wangwe were also in attendance.