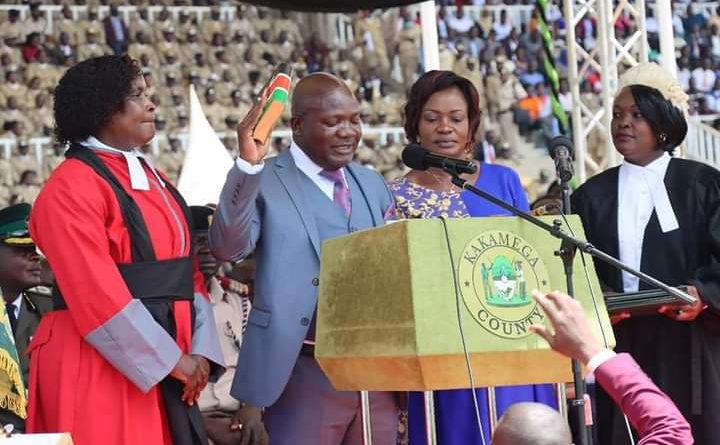 Kakamega County’s newly sworn in Governor H.E FCPA Fernandes Barasa has assured residents that he will not disappoint them during his tenure as the County CEO. The Governor said this in his inaugural speech after taking over the mantle from the outgoing Governor H.E Dr. FCPA Wycliffe Ambetsa Oparanya, at Bukhungu Stadium where he committed to run a responsible County Public Service that guarantees efficient and effective service delivery to residents.

In his six point agenda, the Governor pointed out Health, Food Security, Wealth creation, Education (focussing on the devolved functions), Social Development and Good Governance as very key in realising his aspirations to the people of Kakamega County.

On health, the County boss said health facilities will henceforth be agents of saving and prolonging patients’ lives and not transition centres for early deaths. County energies and resources, he reiterated, will be directed towards restoring the dignity of every resident of the County.

“We are going to work towards ensuring a functional health system that meets the needs of every resident in addition to equipped facilities operated by well trained and motivated staff,” Governor Barasa said.

He stated that cartels that have made it difficult for patients to access quality health services, specifically at the County General Hospital, will be dealt with ruthlessly.

“Kakamega will soon become one of the leading medical destinations nationally with functional Level 4 Hospitals in all the 12 Sub-Counties; the cost of treatment in our public health facilities will be affordable to our people,” the County CEO assured.

On Water, the Governor said his administration will endeavour to connect as many homesteads as possible to ensure clean and safe drinking water for all.

In trade, Governor Barasa said his administration will capitalize on the County’s peaceful and progressive environment to promote business growth making Kakamega more attractive to investors. He implored leaders from Kakamega and the Western region at large to start investing back at home saying Kakamega is a sleeping giant with a wide range of opportunities especially in the hospitality industry requiring committed sons and daughters of the land to pool together and invest in the sector to create employment opportunities for the people.

“As a Government, we will also bring on board investors and prioritise construction of industrial parks in each of the three regions to spur economic growth further,” he added.

To emphasize his campaign promise to the Bodaboda sector, Governor Barasa said an assembly plant and other three satellite mega spare parts shops, fully operated by their Sacco’s will be set up to reduce the initial and operation costs of the bodabodas.

In Agriculture, the Governor noted that the County will maximize on agricultural research findings coupled with resolutions of public participation forums to empower farmers to engage in specific farming activities so as to achieve mass quality production contributing to increased own source revenue.

Deputy Governor H.E Hon. Ayub Savula on his part asserted that he will work closely with his boss Governor Barasa, to deliver on their promises to the residents of Kakamega County emphasizing that their focus is on service delivery.

The colourful ceremony was attended by elected leaders from both the National and County Assemblies, National and County Government Officers, Representatives of various renown academic Institutions, Development Partners, County staff and members of the public.