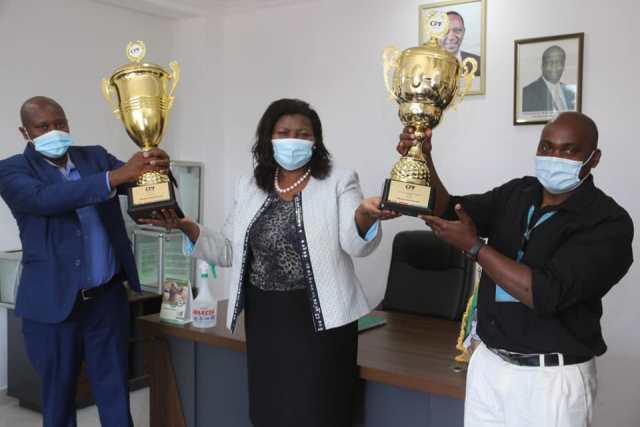 Kakamega County emerged the overall winner in Kenya under the devolved governance in the annual County Pension Fund (CPF) competition.

Speaking on Monday at Kakamega County headquarters during the official handing over of two trophies to the County Secretary and Head of Public Service Madam Jacinta Aluoch Odhiambo, the CPF delegation led by Bungoma Branch Manager Samuel Melly and his Kisumu counterpart Joseph Lugaliki applauded Kakamega County for membership growth, timely remittance of members’ contributions and full compliance to the requirements of CPF which contributed generally to the win.

CPF is a contributory retirement benefit scheme for County Government employees, where both the employer and the employee contribute for the benefit of county public servants.

The CS, who represented the Governor H.E Hon FCPA Wycliffe Ambetsa Oparanya, thanked CPF for the mutual partnership and respect of the contract that has seen senior citizens live a better life after active service to the public.

“We are committed to excellency and doing what is right. Kakamega has a very strong service delivery department that is dedicated to give the best to our staff. So far we have 7000 live members who will benefit from this scheme,” she said.

The trophies now find their enviable custody in Kakamega County after FCPA Oparanya received them in June in Nairobi in his capacity as Chair of the Council of Governors and Governor of Kakamega County, during the CPF’s annual general meeting held at the scheme’s head office.

The CS appreciated the team for their willingness to partner with County governments in the fight against the Corona virus pandemic and extended Governor Oparanya’s greetings to CPF’s family.