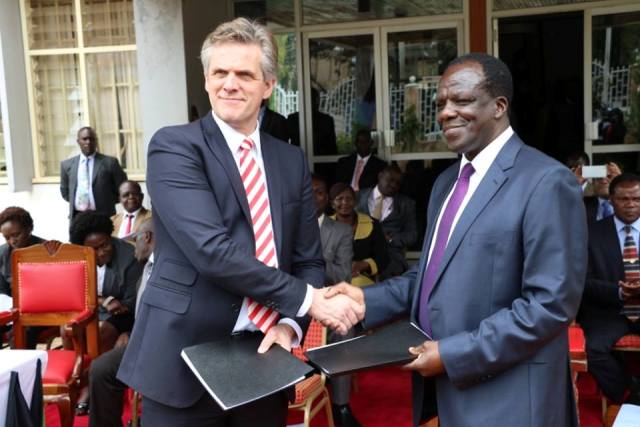 Kakamega Dairy Development Company Limited and Smart Dairy Kenya Holding BV of USA signed a contract for dairy development in Kakamega on Tuesday 19th January 2016 at the county headquarters. The joint venture now paves way for the construction of a modern milk plant in Malava Sub-County starting September this year.

H.E Governor Wycliffe Ambetsa Oparanya hailed the venture as a significant step in the County Government’s strategy for food security and economic empowerment for Kakamega County residents which for decades has been dependent on Maize and Sugarcane farming. The Governor said the milk industry will make Kakamega County competitive in dairy production for both domestic and international markets.

The county’s dairy industry will see Smart Dairies Development Company invest in it a total of KShs.7B as the county government provides a conducive environment for the firm to operate. Governor Oparanya said the county government will support farmers to venture into dairy farming by buying them 30% shares. Later in the day, His Excellency Governor Wycliffe Oparanya launched the County Government of Kakamega Staff Welfare Association at the county social hall. The main objectives of the welfare association are among others, to raise members income through creation of income generating projects, enhance teamwork at the workplace, improve the welfare of members during and after employment and to promote employer and employee relationship for efficient work performance, among others. He rewarded 5 county retirees of July 2015, appreciating them for a job well done in rendering service to the public.

The Governor however called on the county staff to familiarize themselves with the Kenyan Constitution and the laws enacted by the County Government through the Kakamega County Assembly so as to be privy with their constitutional rights and ethical service delivery to the populace.