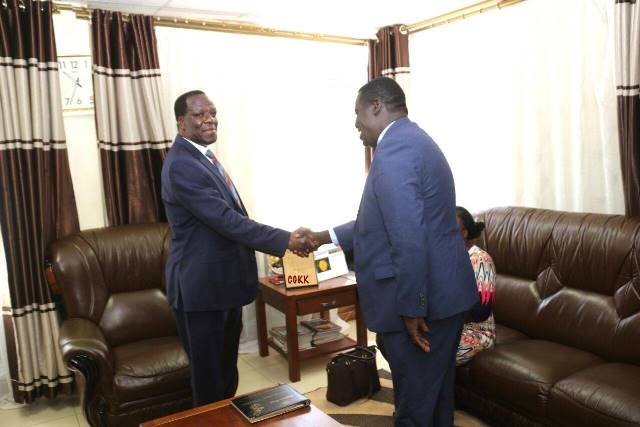 The County Government of Kakamega and Kenya Medical Training College (KMTC) today unveiled plans to establish a Shs200M medical training facility in Kakamega to mitigate the existing acute shortage of nursing and clinical staff in the county.

His Excellency the Governor Kakamega County, Hon. Wycliffe Ambetsa Oparanya said the county had committed an initial Shs.100M to the project to train the required staff for the three major hospitals being established in the expansive county to serve the population in Butere/Mumias (southern), Iguhu (central) and Lugari (northern).

His Excellency the Governor made the remarks at his office when he received a KMTC delegation in his office consisting of the Director General and CEO, Mr. Peter Tum, board members and senior college management officials.

“With a population of Shs.2 million people, the county has only 1,300 nurses, far short of the required 3,000 while the proposed Teaching and Referral Hospital will need 200 more,” he said. A total of 1,000 doctors will be hired by the Level 6 Hospital of which phase one will be commissioned in June, 2018.

He said the county Government will closely collaborate with KMTC to acquire land and develop requisite infrastructure to ensure smooth implementation of the project.
The Governor accompanied by the Deputy Governor, His Excellency Hon. Prof. Philip Kutima and County Executive for Health, Mrs. Penina Mukabane led the KMTC team on a tour of the on-going construction of the Shs.6 billion Kakamega Teaching and Referral Hospital. On completion, the hospital will be well equipped with state of the art cancer, renal, maternity, radiology and treatment plant facilities, among others.
Thanking the Governor on behalf of his delegation, Mr. Tum said his team was grateful and committed to work with progressive Governors to ensure sustained viability of health training facilities in the country.

Mr. Tum commended the county government for the visionary plans and projects that were underway and expressed confidence that Kakamega will be considered by KMTC for establishment of a Shs.12 billion centre of excellence at the new hospital’s premises.

Meanwhile, plans are underway to establish close collaboration between the County Government of Kakamega and Kenya School of Government based in Nairobi on training, consultancy and advisory programmes towards improvement of public service delivery.

A high powered delegation from the school led by the school’s Head of Centre for Public Service Values, Ethics and Integrity, Dr. Florence Kithinji and consisting of technical experts from the State University of New York, USA, paid a courtesy call on His Excellency the Governor at his office and briefed him on modalities of rolling out e-learning training programmes pertaining to ethics and integrity values in public service, in line with relevant provisions of the Kenya Constitution.

The mandate of the School is to provide support for the transformation of the public service through development of professional expertise and public service values; problem-solving research, that informs public policy; and consultancy services for organizational re-engineering to achieve sophistication, adaptability and responsiveness for competitive advantage.