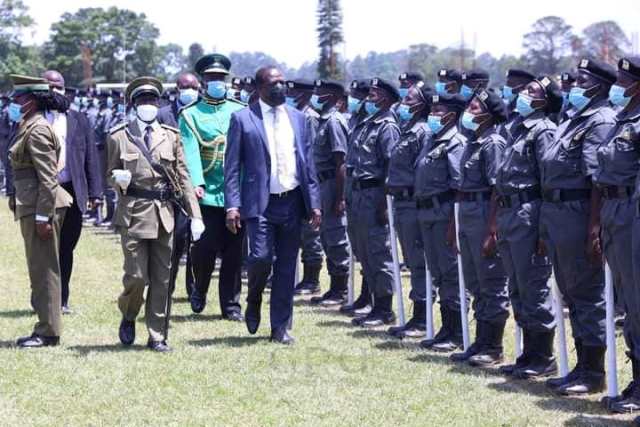 Hundreds of youth passed out as County security guards under the Kakamega County Youth and Women Empowerment Programme (CYSWEP) in a colourful ceremony held at Bukhungu stadium and presided over by Kakamega Governor H.E Dr. FCPA Wycliffe Ambetsa Oparanya, Friday.

The 700 hundred young men and women who have been under a two weeks rigorous and professional training on core security guarding skills will now be assigned to guard County facilities and installations. In addition to physical training, they have also been trained on report writing, public relations and communication skills among others.

Speaking during the event, Governor Oparanya congratulated the officers for successfully completing the training calling on them to offer their services to the community as required and expected by the Government and members of the public.

“This is one of the several programmes my Government initiated as a way of creating employment and uplifting the living standards of residents especially the youth,” Governor Oparanya explained.

Besides the Pass-Out ceremony, hundreds of vulnerable residents mostly the elderly were also issued with a mattress and two blankets by the Governor with an aim of improving the livelihoods of the affected households. In addition to that, the Government will also construct 720 houses for the identified less fortunate people in Kakamega county, under the County Shelter Improvement Programme, Phase V.

“This is a programme that seeks to also empower and engage our young people constructively through County Polytechnics which are contracted to construct the structures,” he said.

According to the CYSWEP director Mr. Edward Osore, Friday’s graduates were sourced from members of the CYSWEP cohort which underwent a two months paramilitary training at Kakamega School in 2019.

The colorful event was attended by Members of County Assembly, CECMs, County Secretary and Head of Public Service Amb. James Ochami, Chief Officers and other senior Government officers from both levels of Government.