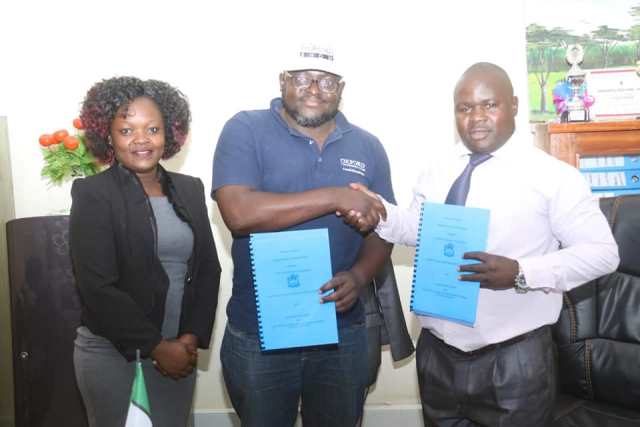 Kakamega County and most of the western Kenya region is home to some of the most revered thespians in Kenya and beyond. With weighty names like Peter Lukoye, Oliver Litondo and Papa Shirandura, you will have a good sense to organize a function befitting the crowds that have produced such calibre of talents.

To this end, the Ministry of Trade, Industrialization and Tourism today signed an MOU to bring to Kakamega one of the most celebrated “laugh” shows on Kenyan television – *_Churchill Show._*

Making remarks just before appending his signature to the legal document, the CECM for Trade, Industrialization and Tourism, Mr. Kassim Were said the show to be hosted at Bukhungu Stadium on 14th December 2019, will be attended by 70,000 fans and will put Kakamega County’s phenomenal development milestones and tourist attractions in national limelight.

“Our notable tourist attractions and cultural heritage sites including Nabongo Shrines, Kakamega Forest and the crying stone will be given intense publicity prior to the event,” Were said, as he urged fans from the entire western region to converge in Kakamega for a good laugh.

He said the show will also seek to highlight and tap into talents among the youth as it coincides with Kakamega County Cultural week festivities.

“Churchill Live Show will be an important fun side of the County Cultural Week which will spotlight serious branding of this great County,” he added.

Signing on behalf of Laugh Industry Ltd, the director of Strategy, Special Projects and Partnerships, Mr. Ken Waudo who was accompanied by Mr. Eric Kitiku, said he looked forward to a great show in the County that has produced legendary thespians.