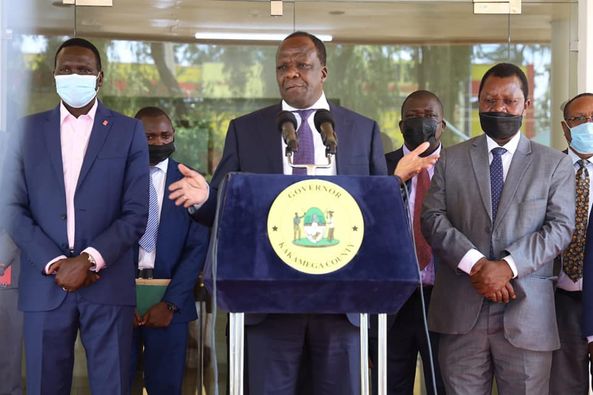 Kakamega County will host the next edition of the Sports Personality of the Year Awards (SOYA) at Bukhungu Stadium on 21st, January 2022.

This was announced by H.E Dr. FCPA Wycliffe Ambetsa Oparanya during a media briefing Thursday when he hosted SOYA founder and International Olympics Committee (IOC) Member Dr. Paul Tergat at the County Headquarters where a Memorandum of Understanding (MoU) between the County Government of Kakamega and SOYA organizers was signed to work towards success of the event. Dr. Oparanya thanked the organizers for considering the County’s bid to host the fete which recognizes and awards sports personalities and organizations that have excelled in various sports disciplines locally and internationally.

Through the event, the Governor said, youths have been socially transformed, sports have been promoted and careers in various sports disciplines have been defined. He added that sports men and women have also created links with corporate organizations which has gone a long way in benefiting the athletes.

“I take this earliest opportunity to welcome sports lovers to Kakamega County, the hub of sports, in January 2021 as we celebrate and honor our sports people together,” he said.

Dr. Paul Tergat thanked Governor Oparanya for developing sports infrastructure in the County drawing attention to the towering Bukhungu stadium as a facility that will motivate athletes to grow their talents. He said SOYA organizers opted to take the event to the grassroots, the cradle of sportsmen and women and other stakeholders so as to motivate upcoming athletes.

“We look forward to hosting international sports personalities during the event as has been the norm since inception of the awards; this is Sports Tourism in play,” Dr. Tergat who is also the President of the National Olympics Committee of Kenya (NOC-K), added.

SOYA was initiated in 2004 by Paul Tergat with the past 14 years’ awards being held in Nairobi. Kakamega County and the Western region are historically known for producing sprinters, informing the organizers’ decision to invite 100 metres World Recorder holder Jamaican Usain Bolt to grace the event.

Deputy Governor H.E Prof. Philip Museve Kutima and CECM Kassim Were were in attendance among other Government officers.