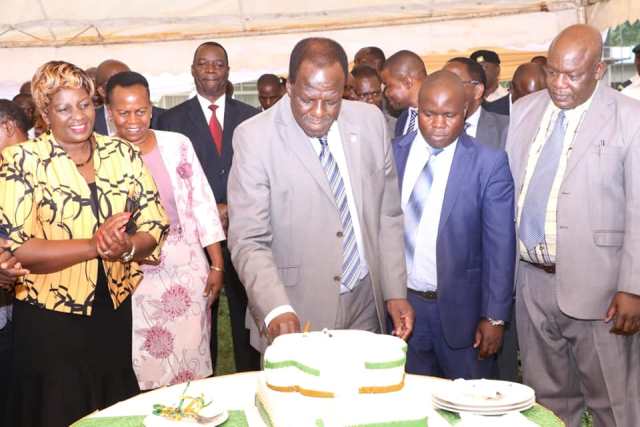 Members of Kakamega Executive Committee and other senior officials including chief officers today feted Governor Wycliffe Ambetsa Oparanya following his re-election as chair of Council of Governors for a second term.

The brief celebratory event involving cutting of a cake and presentation of a congratulatory card signed by all CEC members was organized at Golf Hotel Kakamega.

The ceremony caught the governor unawares as he acknowledged that Kakamega County was rated highly not only by fellow governors but also the top leadership at the national level.

“I must say this is a pleasant surprise for me,” he said, adding that despite the many challenges facing the County including inadequate funds and administrative bottlenecks, we enjoy substantial support from stakeholders.

“Thank you for your support. I will endeavour to reciprocate it,” he said.

Commenting on his re-election dynamics, governor Oparanya said he sailed through because of his development track record and the trust and confidence he enjoys among his peers.

Welcoming the governor to the event, the CECM for Trade, Industrialization and Tourism, Mr. Kassim Were said the County was proud of the achievements recorded under H.E. the governor’s leadership which he said had propelled the County to “cloud nine.” Waziri Were is the chairman of hospitality within the Executive.

On his part, the CECM for Education, Science and Technology, Mr. Joseph Indire presented the sumptuous cake baked by students at Kakamega County Polytechnic.