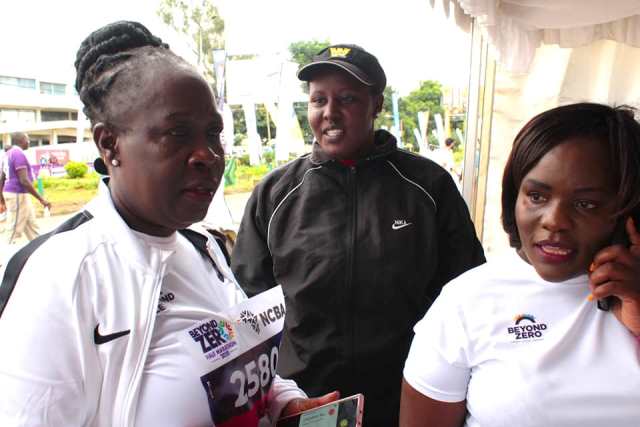 The event, that is held annually, is an initiative launched by the Kenya’s first lady with the aim of improving maternal and child health in the country, and to reduce new HIV infections among children.

Since its launch in 2013 many local and international organizations have joined Mrs. Kenyatta and the Kenyan government in supporting Beyond Zero campaign.

“Current statistics indicate this initiative has steadily addressed fistula complications among women as well as maternal health care,” Mrs. Oparanya said at the sidelines of the event. The first lady who is also a maternal healthcare champion in Kakamega county, noted that through various initiatives launched by her office in Kakamega, maternal and neonatal mortality rates have drastically reduced. She appealed to partners to support the race and extend further support to Kakamega county and other needy counties.

Mrs. Oparanya participated in the 5kms race. The event attracted amateur and elite runners from across the country with the winners in various categories taking home a total of Kshs 5.6 million.

ELSEWHERE, Kakamega Governor H.E. FCPA Wycliffe Ambetsa Oparanya today evening joined hundreds of soccer lovers to witness one of East and Central Africa oldest football derbies between AFC Leopards SC and Gormahia FC at Kasarani Stadium, Nairobi. Governor Oparanya, an ardent AFC Leopards supporter, has in the past served as a treasurer at the club popularly known by its loyal fans as INGWE.

Ingwe, who were the most entertaining in the encounter, however lost the match to their bitter rivals by a solitary goal.