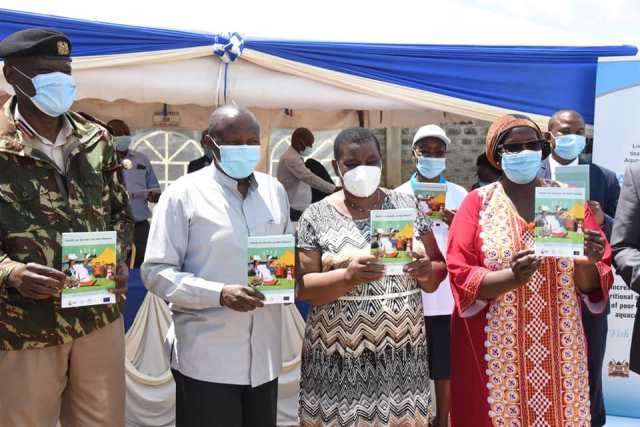 Fish farming is emerging as a lucrative venture for farmers in Kakamega County. With over 3,000 documented active fish farmers in the county, the devolved sector has benefited to a large extend in funds allocation from the County Government for fish farming development.

In this Financial Year (2020/2021) the County Government has allocated Shs25 million for the Ministry of Agriculture, Irrigation, Cooperatives, Veterinary, Livestock and Fisheries; Shs2 million shy of the previous year’s allocation. The amount will go to the Fish Subsidy Programme, Fish Pond Development and Capacity Building that will involve training of farmers on fish production at aquaculture field schools.

The Governor’s speech as read by Madam Okumu, during the issuance of fisheries inputs to the first 50 farmers at Lutonyi, Sheywe ward, Lurambi Sub-County, stated that fish farming as a flagship project in the county has received a substantial financial support from the County Government in addition to the project being anchored in the 2018-2022 County Intergrated Development Plan (CIDP). A total of 2,941 farmers are targetted to benefit from the ongoing nets distribution program.

“We have a huge potential for aquaculture hence the need for coordinated efforts by stakeholders to enhance production and productivity. The nets will prevent fish losses to predators such as birds, allegators and oaters,” the Governor’s speech read.

Earlier on during a courtesy call on the Deputy Governor Prof. Philip Museve Kutima, at his boardroom, the DG implored on the National Government officers to support the Agriculture County Executive Madam Okumu in actualising fish farming programs in the County. Prof. Kutima said Kakamega County has a vibrant Fish Farmers Cooperative with over 500 registered members.

The Principal Secretary Prof. Japheth Michieni thanked the Deputy Governor for laying a strong foundation in the fish development sector during his term as the in-charge CECM

Prof. Michieni said the statistics indicating a rise in production of fish in Kakamega County signify the huge investments put in by the County Government.

“Fish farming is a driver towards achieving the goals of Vision 2030 and Food Security item on the Big Four Agenda; and a contributing factor on the growth of the economic pillar,” he said.

Hon Kilimo urged the selected farmers to utilize the fish farming material provided for the intended purposes and called for close cooperation between the two levels of Government to achieve the set objectives.

Through the County Government sponsored Fish Feed Subsidy Programme, farmers have increased fish production in readiness for operationalisation of the Kakamega County Fish Factory that has a potential of processing 12 tonnes of fish per day. The county has also constructed a perimeter wall around the fish firm as well as a Fish Feed Warehouse; and purchased motorcycles to enhance mobility of fish farming extension officers. In addition the County Government has acquired harvesting nets for farmer groups and supplied high quality fingerlings to farmers.

Also in attendance were the Chairperson County Public Service Board Madam Catherine Raini Omweno, Chief Officers Dr. Kelly Nelima and Jeremiah Namunyu and the Director of Fisheries Zephaniah Otieno among other senior government officers from both levels of government.