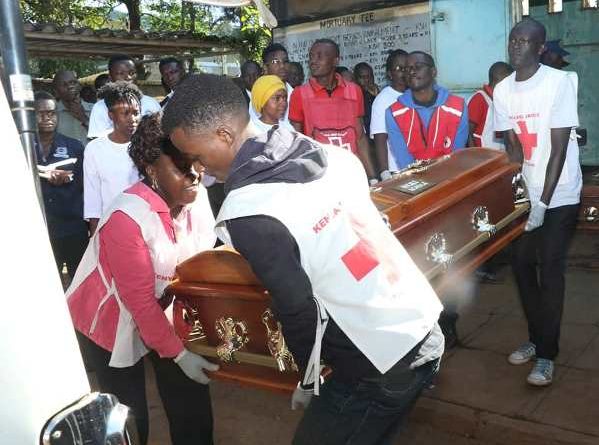 In his speech, the governor passed his condolences to the bereaved families and the entire fraternity of Kakamega Primary school for the loss of their loved ones. The accident claimed the lives of 5 boys and 9 girls in standard 4 and 5. Governor Oparanya exhorted Kenyans to pray for the County, saying the residents had suffered a series of calamities since 2014 including terror attacks and horror road accidents.

Kakamega Primary with a current enrolment of 3,128 pupils in the primary section and 296 children in the ECDE has been posting good results since 2014 with a mean score of at least 322 marks.

The governor who immediately constituted a committee comprising of officers from both the National and County Governments to organize the funeral service, thanked various organizations for their quick response and emergency support on the fateful evening that saved many lives. They included the Kenya Red Cross, UNICEF, World Vision, St. John’s Ambulance, Masinde Muliro University of Science and Technology and Kenya Counseling Psychologists.

Education Principal Secretary Dr. Belio Kipsang said each bereaved family will receive Kshs. 100,000 from the National Government to assist in funeral arrangements. He thanked the County Government of Kakamega through governor Wycliffe Oparanya for waiving the hospital and mortuary bills for the victims of the accident. He announced that the school will reopen on Monday and urged parents to allow their children to report back to school on that date.

Many speakers who addressed the mourners called on the investigative agencies to speed up the process and leave no stone unturned to ensure no such accidents occur in future. Others recommended a judicial inquiry instead of the normal police investigations.

The leaders questioned why the ministry of Education had not subjected school infrastructure to a rigorous quality assurance and safety standards regime.