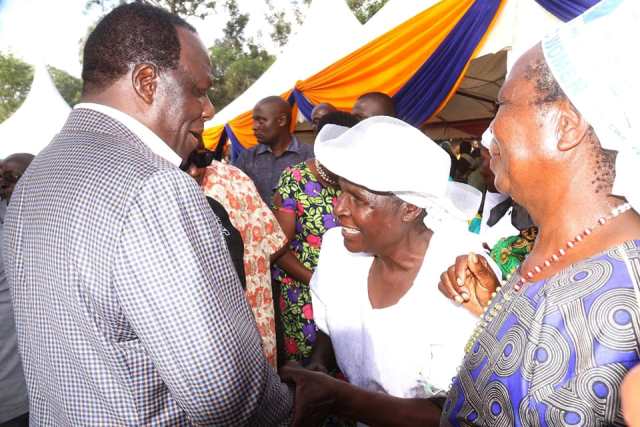 Kakamega leaders today roundly condemned the spate of crime in Matungu Sub County saying it was shaming the whole county.

They said the killings targetting innocent villagers including school children were unacceptable and security agents must move with speed to contain the situation.

The leaders led by Kakamega County governor, H.E. Wycliffe Ambetsa Oparanya were speaking in Ebuchirina village, Musanda ward, Mumias West Sub County during the burial of the late James Olukhale Odembo, a brother in law of the governor.

“The spiralling crime shows that security forces are not working as expected and that could be the reason why wananchi are taking the law into their own hands in revenge attacks,” governor Oparanya said.

The MP for Ikolomani, Hon. Bernard Shinali called for mass transfers of security personnel from the county while his Shinyalu counterpart, Hon. Justus Mugali Kizito gave outlaws one week to surrender to security agencies failure to which they will face dire consequences.

Speaking on the ailing sugar sector, governor Oparanya who is also the co-chair of the national sugar taskforce said their report will be submitted to H.E. the president Uhuru Kenyatta within 2 weeks. He wondered why the board of directors of Mumias Sugar Company was planning to sell some of the company’s key facilities and equipment before the recommendations on the revival of Mumias factory are unveiled by the report.

He reiterated that should the company persist in its quest to sell the assets, he will mobilize sugarcane farmers to stage a permanent sit-in at its premises until the matter is resolved.

The governor vowed to ensure the factory is revived before he leaves office in 2022.