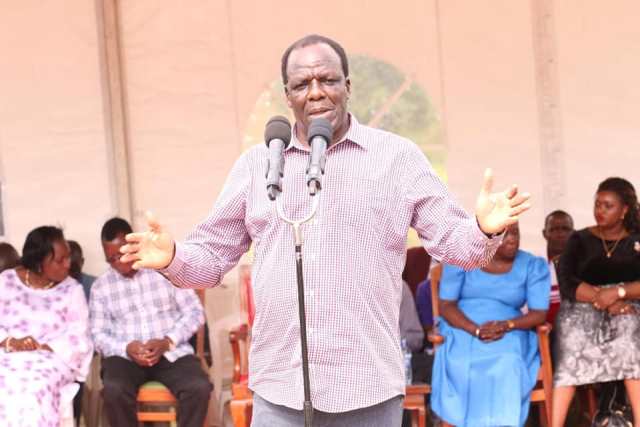 Kakamega County Government has already set up an isolation wing at the Kakamega County General and Referral hospital for patients with Corona virus symptoms. The County is also in the process of setting up such facilities at Level 4 hospitals in all the sub counties.

Adressing mourners at Mbajo village, Chekalini ward, Lugari sub county Saturday morning, H.E. the Governor called on the mourners to minimize close body contact including handshakes to reduce further spread of the virus in the country.

“Moving forward, even these funerals will be attended by close family members only as a precautionary measure to prevent the spread of the virus for the next 30 days,” the governor said.

Church pastors should consider suspending services and allow their faithfuls to pray in their homes until further notice,” he added.

He directed the Sub County, Ward and Community Area administrators to educate the public on the safety measures that should be adhered to as the country strategizes on how to contain the virus. Covid-19 was first reported in the Chinese city of Wuhan and has since led to the deaths of over 3000 people with China and Italy being the worst hit.

The County boss said the County Government has already set aside Kshs. 24 million to purchase drugs and equipment as the County prepares to fight the virus.

The governor also reminded residents and farmers to be on the look out and make timely reports on any cases of the desert locusts in the county to the relevant authorities. “We are adequately prepared to tackle locust invasion with the right equipment including planes, pesticides and well equipped personnel,” he assured the residents. He said Lugari and Likuyani sub counties will receive the largest supply of farm inputs and urged interested farmers to register with their respective Ward Administrators.

Governor Oparanya eulogized the late Joyce as a hardworking and dedicated employee of Kakamega County Government in her capacity as an administrator.

He cautioned farmers against selling subsidized farm inputs to their counterparts in neighbouring counties as this would undermine the government’s food security strategies. Responding to a request from Navakholo MP Emmanuel Wangwe, the County boss assured residents that his government will set aside funds for construction of weather resistant bridges on major river crossings in the area.