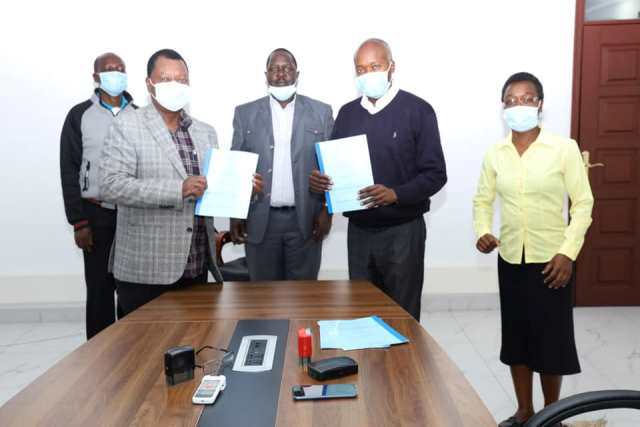 Speaking after signing an MoU between Kakamega County Government and DAS Group, Deputy Governor Prof. Philip Museve Kutima said the county has 500 registered fish farmers who will supply fish to the factory. “The government offers subsidies on fingerlings and fish feeds. This has increased fish production in the County,” said Prof. Kutima who is also the CECM for Agriculture, Irrigation, Cooperatives, Veterinary and Livestock services.

The Deputy Governor said operationalization of the factory will create employment and business opportunites for the locals. “Our economy will be boosted once operations begin and will also market Kakamega County to the external markets,” he added.

Livestock and Fisheries Chief Officer Dr. Kelly Nelima said the County has already sensitized fish farmers through county government extension officers. “We are encouraging diversification in farming and urge more people to embrace fish farming as a source of income and for the health benefits,” she said.

Fish farmers will also be trained through their umbrella body, the Kakamega County Fish Cooperative, on the best fish farming practices and management.

DAS Group representative Mr. Samwel Ondiek said the factory is able to process 5 tonnes of fish in a span of 8 hours. “The plant complies with EU certification for export giving us an opportunity to export fish to European markets,” he said.

He said the Group has already partnered with local retail markets including supermarkets for supply of fish products from the factory.

The County government has also partnered with other development partners including IFAD, FAO and GIZ to beef up extension and training services to farmers.