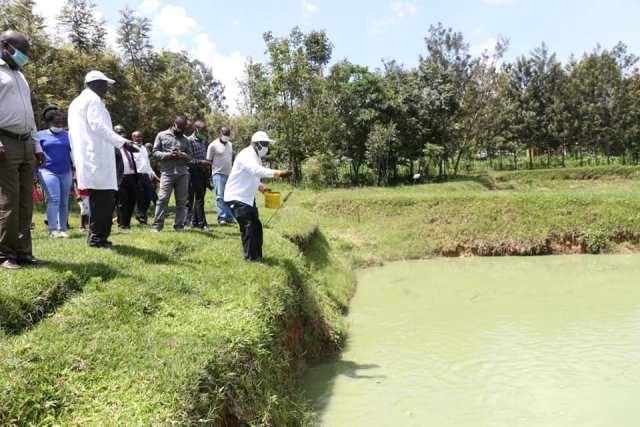 Mr. Laban Mwanzo, one of Kakamega County’s leading fish farmers from Malava sub county continues to swim his way to the bank, thanks to his fish farming business.

With 34 fish ponds situated on a 3 and half acre piece of land, with even more space for expansion, Mr. Mwanzo is the largest producer of fingerlings in the county and is ranked among the top 20 fish farmers in the country.

The CECM for Trade and Industrialization Mr. Kassim Were Wednesday afternoon visited Mr. Mwanzo’s farms in Malava in company of Kakamega fish factory investor Mr. Samuel Ondiek, on a fact finding mission dubbed *”Grow Fish Enterprise”.* The aim of the visit was to establish the active fish farmers in the county in preparation for the operationalization of Kakamega fish plant.

“We are amazed by the efforts being made by our fish farmers; this will go a long way in ensuring success in operations of the county’s fish factory that is ready to begin processing of fish products,” Mr. Were said after visiting the two fish farms at Ingavira and Malava town.

The CECM said Kakamega County Government has invested in fish farming by offering extension services and subsidized fish feeds to farmers through the Ministry of Agriculture headed by deputy governor H.E. Prof. Philip Museve Kutima. “I encourage more farmers to embrace fish farming on a large scale so as to meet the market demand in our county both for commercial and subsistence purposes,” he said. The county requires a minimum of 7,000 fish ponds to effectively serve the fish factory which is capable of processing 5 tonnes of fish per day.

“Through Kakamega County Microfinance we will also support farmers financially to actualise their dream in fish farming,” Mr. Were said.

Mr. Samuel Ondiek the factory investor expressed optimism that local fish farmers can meet the needs of the factory with the support of various partners and hailed the huge investment in the sector by the county government. “The factory will depend on raw materials supplied by Kakamega county locals and other Lake Region Economic bloc (LREB) member counties,” he said.

Mr. Laban Mwanzo who is also the chairman of Kakamega Fish Cooperative urged other fish farmers to join the entity for ease of marketing their produce. Currently the cooperative has over 400 farmers spread across the county.