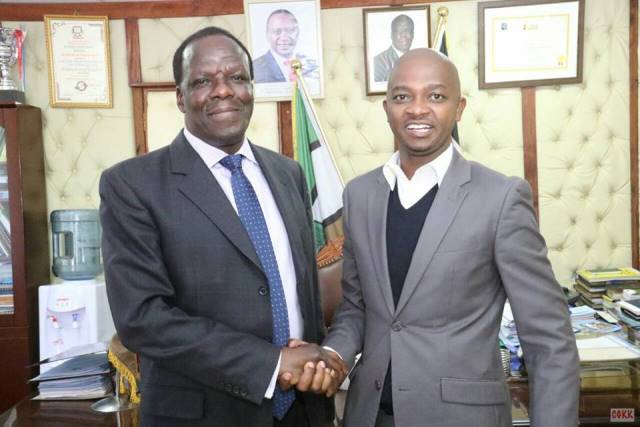 The delegation is on a fact finding mission on the condition of stadia in Kakamega County for a possibility of hosting CECAFA tournament to be held between November 26 – December 9th 2017.

Governor Oparanya said Bukhungu Stadium upgrade was among his promises to the residents of Kakamega to ensure growth of sports and talents in the County.

Mr. Mwendwa said the project is an eye opener to other stakeholders in the sporting fraternity in the country and challenged other elected leaders to follow suit and improve sports in the country by investing in sports infrastructure. He promised to invite Confederation of African Football (CAF) officials to Kakamega this month for inspection of the stadium and expressed optimism that the facility would eventually be chosen to host the much celebrated East and Central Africa tournament. Nakuru and Kisumu are the other counties bidding to host this year’s edition of the tourney.

CECAFA Secretary General Mr. Nicholas Musonye said the stadium will motivate upcoming footballers and other sports personalities to persue their talents even further. He thanked the Governor for his visionary approach towards sports saying in his reign as the Secretary General of the largest football body in East and Central Africa, Bukhungu Stadium construction was one of the most promising projects he has witnessed in the region so far.

Mr. Mwendwa said his office (FKF) will work with the County government to ensure the playing turf, security requirements, sound system and stadium big screens among others conform to CAF required standards. He said completion of the facility will make Bukhungu a major bidder for hosting either the Mens’ Under-20 or Women African Cup of Nations football competitions to be held in 2019 and 2020 respectively. The stadium serves as the training ground for Kakamega Homeboys FC currently placed second in the national FKF-KPL league.