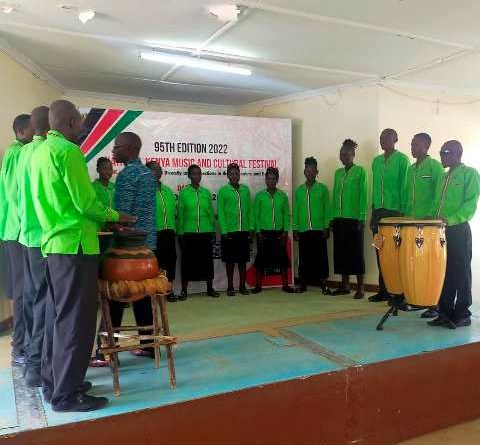 The Cabinet Secretary for Tourism, Wildlife and Heritage Hon. Peninah Malonza today, Saturday 3rd December 2022, graced the official opening of the National Kenya Music and Cultural Festivals, 95th edition at the Kitui Multi-purpose hall, Kitui County where she implored Kenyans to take pride and recognise the role played by culture in uniting the Kenyan people.

In her address, the CS said the festival has brought together communities from all corners of the country to celebrate the rich Kenyan culture being showcased at the competitions through various genres among them folk songs, traditional dances, films, dances, poems, films and elocutions among others.

Hon. Malonza noted that culture is the base upon which a nation’s civilization is established, impacting values and behavioural norms to future generations and in need of safeguarding by all stakeholders.

“The Government will provide necessary policies and framework to ensure culture, an enabler sector, is developed; this will immensely boost the tourism sector which is a massive foreign income earner for our country,” the CS underscored.

This year’s theme is; “Embracing Cultural Diversity and Connections in the 21st Century and Beyond.”

County Director for Culture Madam Gaudencia Otipa who represented the Ag. CECM for Social Services, Sports, Youth, Gender and Culture Dr. George Lutomia during the opening ceremony noted that Kakamega – 8 time overall national champions, consecutively- has presented a strong team of 240 participants adding that the County is going for nothing less of a podium finish at the festivals whose curtains come to a close on 7th December, 2022.

Sifa Melodies are among Kakamega County representatives rocking the airwaves in Kitui County.