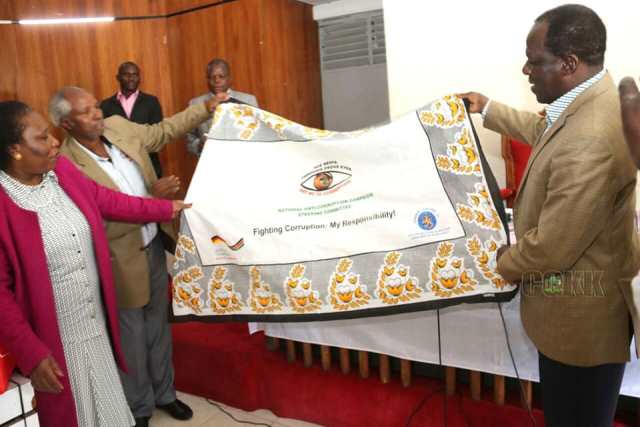 This morning H.E Governor Wycliffe Ambetsa Oparanya hosted members of the National Anti-Corruption Campaign Steering Committee (NACCSC) led by Mr. Francis Ng’ang’a at the county headquarters to find ways of partnering with the county in the fight against corruption and to ensure members of the public are sensitized on national values and encouraged to participate directly in the fight against the vice.

H.E Governor Oparanya welcomed the team to Kakamega saying such an engagement was long overdue as corruption is threatening the national social fabric and ruining the economy of the country. The Governor added that organs mandated to investigate corruption in government institutions should live up to expectations terming their current efforts as unsatisfactory and unfruitful. The Governor reiterated his government’s commitment to curbing the vice and said he has created the Office of the Ombudsman in the government structure which will work closely with Anti-Corruption agencies to ensure zero-tolerance levels in the county government system. He challenged the national government to stop the blame game as the fight was a collective responsibility.Governor Oparanya called on the national government to be committed to the war against corruption referring to the recently released report by the Office of the Auditor General where massive public funds are feared to have been embezzled as quite unfortunate as no individual has so far been taken to task about the same. He challenged the NACCSC members to step up efforts in fighting the vice warning them not to leave such an enourmous task to politicians as the latter were among the most untrustworthy individuals to be entrusted with such a task.

The Governor announced that his government has strengthened the Office of Internal Audit which has been entrusted to pick up any weakness in the financial control. He also mentioned the contracting of Price Waterhouse Cooper to look at the county government’s systems and flow of information and Engaging the office of the Auditor General towards construction of a regional office in Kakamega to easily tap the expertise whenever necessary as some of the measures his government has employed to seal the loopholes. The Governor termed realization of Vision 2030 unrealistic if government institutions continue embracing corruption.

Kakamega County Assembly Speaker Hon. Morris Buluma who was present promised to mobilise members of the assembly to be engaged in public participation drives in speaking against the vice.

Mr. Francis Ng’ang’a thanked the Governor for the support as county government officers had shown utmost cooperation in giving out information relevant to the committee.

Later on H.E the Governor left the office for Ikolomani, Shinyalu and Lurambi sub counties where he is currently engaged on a day long inspection tour of roads constructed or under construction by the county government.