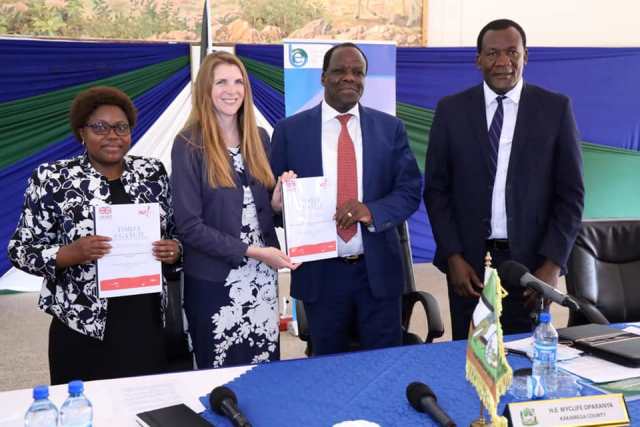 The Summit that brought together six Governors among other key stakeholders saw the Bloc sign an MoU with UK funded Kenya Devolution Program (KDP) to foster development and growth of the region. The Program that will cost Ksh 1.5 billion will focus on development in Trade and Investment, Healthcare, Governance and Devolution support, Urban Development, Peace and Conflict management and Education and other areas of mutual interest.

The Summit also witnessed the signing of the UK REINVENT program that will enhance peace and security in the region.

The peace pact committed all LREB Governors on advocacy and promotion of peace in the region and beyond despite their different political affiliations.

In her address, H.E Marriott said she was greatly honored to witness the signing of the statement of commitment to peace as the country approaches 2022 General Elections and the support to LREB by the UK sponsored Devolution Program whose team leader is Ms Agnes Odhiambo the pioneer Controller of Budget.

“As we enter the election season, we note that like in many countries Kenya has one of the most competitive sub-national elections and the commitment that the 14 LREB counties made can have positive echoes across the country and as an example of how intra-county contestations and inter-county tallies can be managed peacefully and credibly. Our reinvent program will continue to provide technical assistance on peace building to the region,” she said.

She said UK is proud to have been a partner with LREB since its inception and pledged more support to the regional Bloc to enable it achieve the objectives for which it was established.

Governor Oparanya thanked the UK Government for the support to LREB saying that they were among key partners who are contributing to the stability of the Bloc. LREB, the Governor added, was facing financial constraints and the support by UK has come at the right time.

The Governor used the opportunity to ask politicians in the region to maintain peace during campaigns.