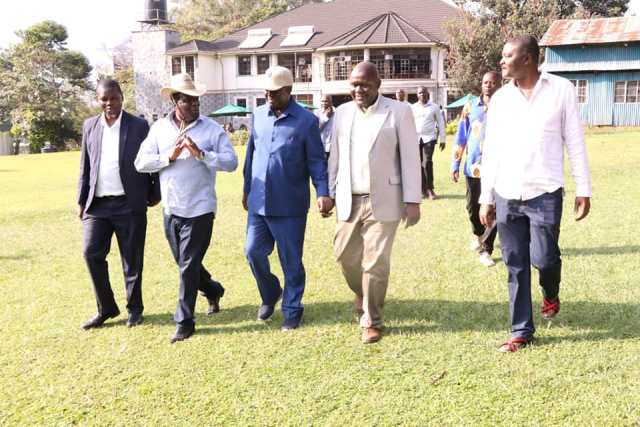 If there was any lingering doubts about disunity among leaders in the Luhya Nation, today’s strong show of solidarity and wise choice of words during the BBI meeting held at Bukhungu Stadium in Kakamega, dispelled all that.

First, the occupants of the main dais consisted of the who is who in Luhya leadership regionally and nationally including governors, deputy governors, Cabinet Secretary, former cabinet ministers,MPS both seating and former, senators, County Assembly speakers, Nabongo Wanga, Council of Elders, MCAs, CECMs, Chief Officers and County Secretaries.

All western region governors led by Kakamega governor who is also the chair CoG H.E. Hon. FCPA Wycliffe Ambetsa Oparanya were in attendance and they issued a comprehensive communiqué through Vihiga governor Dr. Wilbur Otichillo on what they and other leaders from the region wish to see changed in the constitution to strengthen devolution, inclusivity, address electoral injustice, economic marginalization and the fight against corruption.

In his speech, Hon. Raila reminded detractors of BBI of its origin saying he and President Uhuru Kenyatta should be credited with, rather than vilified for, their initiative to break persistent violence in Kenya at every electoral cycle.

The remarks were supported by Hon. Oparanya who said Kakamega BBI meeting was a national project contrary to malicious propaganda that were being pedalled by some leaders that it was a ploy to anoint a Luhya kingpin.

ANC leader Musalia Mudavadi and his Ford Kenya counterpart Moses Wetangula told the Forum that they were not opposed to BBI.
They stated their desire for wananchi to be given ample time to interrogate the BBI report and make informed decisions.

COTU Secretary General Francis Atwoli advised them to break up their respective political parties and forge unity with other Luhya leaders in order to realize the ascendance of a Luhya leader to national leadership.

The meeting resolved to urgently engage wananchi at the grassroots to better understand the contents of the BBI document.