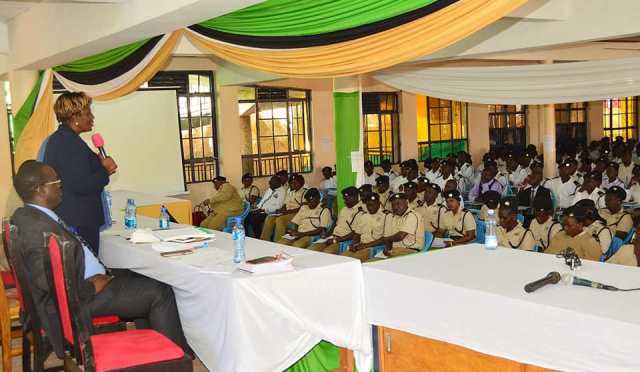 The Ministry of Public Service and Administration (PSA) today held a one-day training workshop for all Sub County, Ward and and Community Area Administrators, on various essential government requirements necessary for effective governance and service delivery.

In her opening remarks, the CECM for Public Service and Administration Dr. Beatrice Sabana said the administrators were the symbols of government in their respective areas of jurisdiction and called on them to serve all residents evenly despite the gender, age disparity,
education levels or political affiliations.

“The governor of Kakamega was unanimously voted in on an ODM ticket but that does not mean we
should only provide services to ODM or opposition supporters; every resident of the county irrespective of the party they belong to has a right to enjoy the services of this government,” she said.

Dr. Sabana also reminded the administrators that they are public servants, a position that prohibits them from engaging in any form of political campaign or/and corruption.

She called on them to adequately elaborate the governor’s manifesto to the residents during formal or informal meetings in their areas adding that it was through such platforms that most of the residents at the grassroots can understand well what
the county government has done for them. The CECM directed the officers to regularly interact with the locals and in so doing pass on
the information received from them to the relevant (higher) offices without any form of filtration.

The workshop was also graced by the CECM for Social Services, Youths,
Sports and Culture Hon. Robert Makhanu who announced that youths
serving under the Kakamega County Youth and Women Empowerment programme will soon be enrolled for a two whole-day class work in county polytechnics. They will however continue discharging their mandate in their wards for the remaining three days of the week. His counterpart at the Education, Science and Technology docket Joseph Indire who was also in attendance called on the administrators to manage the county bursaries offered at the ward level well by
ensuring only the deserving residents access them.

The Ag. Chief Officer PSA Mr Lawrence Omuhaka called for discipline
among the officers and directed them to embrace a weekly and monthly reporting trend of their activities to their seniors. Further presentations of the day
were made by the County Attorney Mr. Moses Sande, Head of Human
Resource Dr. Dominic Muteshi and the Governance Advisor Mr. Musa Ali Chibole.

The Ward and Sub county administrators were also trained on how to operate and use landline office phones and later issued with the essential communication gadgets to enhance service delivery and communication with the public and other government officers. The phone numbers for each ward and sub county will be shared publicly soon.

Also present were; the Chief Officer for Education, Science and
Technology Dr. Irene Ashioya, Head of Administration Mr. Wilson Sifuna Yaola, the Head of Administrative services Mr. Albert Nabwaya and section heads in the Ministry of PSA, among others.