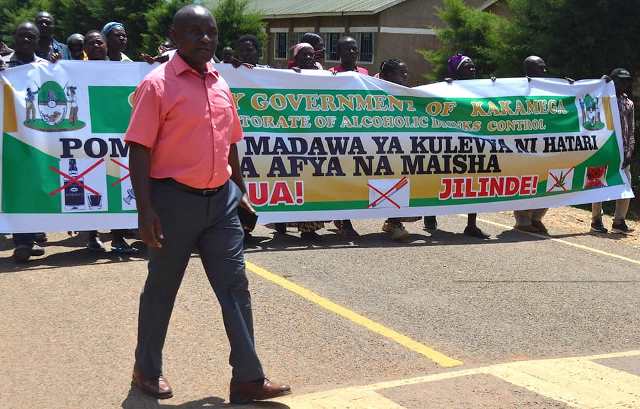 The Ministry of Public Service and Administration through the Directorate of Alcoholic Drinks Control has launched a campaign to reduce the use of drugs and substance abuse and alcoholism in the County.

According to the Ag. Director of Alcoholic Drinks Control Unit Mr. Benson Ochomo, 11.5% of the residents in Kakamega County are
alcoholics and abuse drugs with Lurambi, Shinyalu and Butere sub counties being the most affected areas in that order. “We have launched this campaign in Butere because it is the most affected sub county in this Southern region of our County with over 12.5% of the residents actively engaging in alcoholism and drug abuse,’ Mr. Ochomo said.

Mr. Ochomo reiterated that apart from offering counselling services and sensitizing residents on the effects of the vice, his unit is also reaching out to traditional liquor brewers with support from other partners like the National Authority for the Campaign Against Drug Abuse (NACADA) to train them on alternative business ventures and ideas they can engage in, in place of liquor brewing.

‘’We have also begun an initiative dubbed ‘Behavior Change Initiative’ that seeks to
instill a change in the lifestyle of our people to encourage them move away from some retrogressive cultural practices,’’ he added.

He called on the existing CBOs to form a SACCO in order to receive government support for their programmes.

The residents who attended the event also received free screening for tuberculosis, high blood pressure and diabetes in addition to receiving advice on family planning.

Also present were the Principal Administrator in the Directorate of Alcoholics Drinks Control Mr. Samwel Wamukoya, Mr. Jeremiah Buliba the Administrative Officer in the directorate and the Community Area Administrator of Mumakunda area Mr. Justus Olaka as well as other government officers from both levels of government.