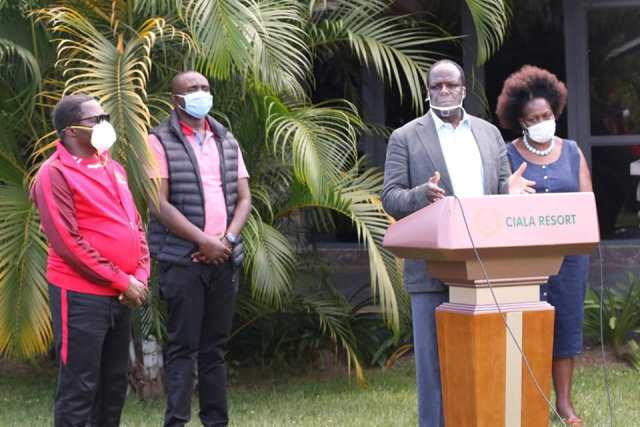 The Council of Governors (CoG) has asked the National Government to move with speed and rescue Kenyans from suffering in China.

The Council Chairman FCPA Wycliffe Oparanya said the council has observed with concerns the way Kenyan citizens among them students are being mistreated in China.

“We regret what is happening to our people in China. I urge the Government to save Kenyans from the pain they are being subjected to,” Oparanya told Journalists in Kisumu.

He noted that Kakamega County has 38 students in China.

“Kenya and China have had a cordial relationship and such racial discrimination might undermine this existing good relationship,” he said.

Kenyans in China have been subjected to torture including being denied access to restaurants, thrown out of their residential houses by landlords and being harassed by security agencies for allegedly spreading Corona virus which was first reported in China.

FCPA Oparanya also noted that the county governments have not violated any laws by promising to give incentives to health workers.

He said the incentives are short term package meant to boost the morale of health workers during this fight against Covid-19.

“The county governments that have made proposals to offer incentives have consulted with their County Public Service Boards and the County Assembly to offer such packages,” Oparanya said.

He was responding to a letter from Salaries and Remuneration Commission (SRC) chairperson Mrs Lyn Mengich who termed the incentives as unlawful and had not followed SRC procedures and recommendations.

“SRC should support the proposals. We are in an emergency situation that need extraordinary measures to address and handle it,” he said.

The Governor lauded Government efforts in combating the virus by saying mass testing will boost the fight against covid-19 pandemic.

The Government has revealed that it has received test kits that will help in testing more than 30,000 people per day.

The Governor urged the national government to put in place proper measures on how to distribute donations to Kenyans.

He regretted that some people lost their lives and others injured when residents of Kibra in Nairobi were being given donations from former Prime Minister Raila Odinga.

“I thank my party leader Raila for the good gesture to support residents of Kibra who are hard hit by Government measures to combat Covid-19. The Government should set strict measures to guide distribute donations to avert ugly incidences like the one witnessed in Kibra. It can use mobile money transfer to support people with money so that they can buy what they are lacking,” he said.

He warned traders against taking advantage of the situation to increase prices of basic commodities.

He said it is time for every Kenyan to sacrifice and support each other in this hard times.

“Some unscrupulous traders have taken advantage of the situation and raised prices of foodstuff. They should stop that and instead sacrifice for other Kenyans,” said Oparanya.