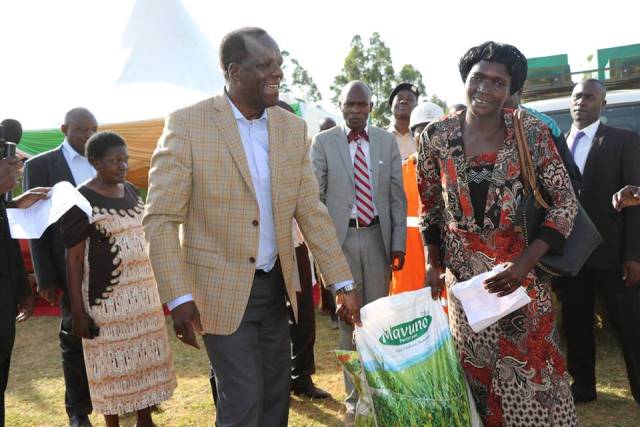 Kakamega County Governor H.E Hon. Wycliffe Ambetsa Oparanya is urging the residents and Kenyans at large to ensure they get their voters cards in readiness for the 2017 general elections. Governor Oparanya reminded the residents who are of age to acquire their national identity cards, and those who had applied earlier to pick them from chief’s offices. The Governor however said he will hold a meeting with both the national and county administration officers to fast track the issuance of National IDs and voters cards within the county during this period that the Independent Electoral and Boundaries Commission (IEBC) is carrying out a one month massive voter registration exercise. IEBC started the countrywide voter registration exercise this week on Monday 15th February 2016. Governor Oparanya was speaking at Malinya Stadium during the launch of the subsidized Mavuno fertilizer to farmers in readiness of the planting season starting next month. The Governor also launched the Malinya-Shikokho-Shikumu road and Malinya-Iguhu road to ease transport in the sub-county. Present were Ikolomani MP Hon. Bernard Shinali and Hon. MCAs.

Elsewhere, Deputy Governor H.E Hon. Prof Philip Kutima led the county in a public participation exercise held at Mumias Cultural Center in Mumias West, where residents from the host sub-county, Mumias East, Butere, Khwisero and Matungu converged for a day’s county dialogue. This comes after a similar exercise took place at Tuck hall in Lumakanda where residents of Lugari and Likuyani engaged their county executive officers on a 3 years performance rating. The County dialogue for this year comes to an end on Friday 19th February 2016 at social hall in Kakamega town where residents of Shinyalu, Ikolomani, Malava, Navakholo and Lurambi will participate.