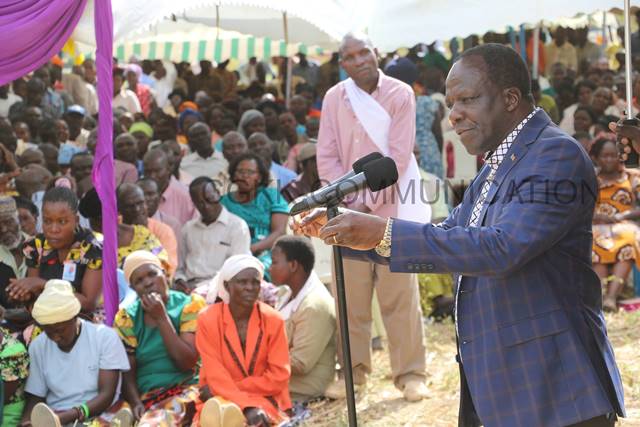 Kakamega county Governor H.E Hon Wycliffe Ambetsa Oparanya has challenged residents to take advantage of government education sponsorship programs and ensure that qualified learners benefit accordingly. Oparanya announced that his government has disbursed Sh120 Million equally, from this financial year’s budget, in all the 60 wards to support bright but needy students in acquiring secondary education. The Governor encouraged parents and guardians to help their children access this funding adding that the government will this year sponsor 12 best students from across the 12 subcounties to further their studies outside the country in institutions of their choice. This, the Governor said is different from last year’s sponsorship that saw 10 students leave for China as two chose University of Nairobi and Maseno University. The Governor went on to encourage qualified students from the county to be checking with their Sub-County and Ward Administrators as well as visiting the county website for information on the County Higher Education Loan to boost their university and college school fees needs.

Governor Oparanya also called on the Luhya Community to rally behind one of their own for communal guidance towards national leadership.

Governor Oparanya was speaking in Matungu and Khwisero Sub-Counties during the burial of the late Gerald Mayobe Oliya who was an employee of Mumias Sugar Company and the late S.S.P – OCPD Marsabit Abel Omukuba Sande, who was brother to Kakamega County Attorney Moses Lukale Sande. The two departed members of the society were laid to rest on Saturday and Sunday respectively.

Governor Oparanya was accompanied by his deputy, H.E Hon. Prof. Philip Kutima, County Executive Members, Members of the County Public Service Board, Hon. MCAs among other officials from both national and county governments.