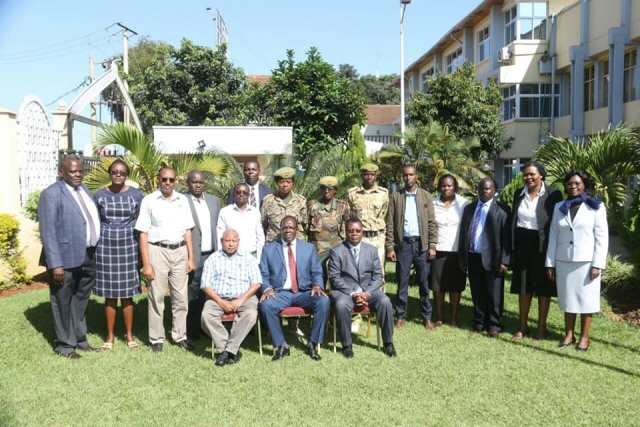 The proposed fencing of Kakamega Rain forest will soon commence after completion of an Environmental Impact Assessment jointly being undertaken by the County Government of Kakamega, Kenya Forests Service (KFS), Kenya Wildlife Service (KWS) and the Rhino Ark Charitable Trust – a charitable trust providing solutions to threats facing forest ecosystem in Kenya. The environmental impact assessment will largely involve members of the public to ascertain the environmental and social impacts of this important project to the community.

This was revealed today during a courtesy call to H.E. the Governor by representatives of KWS, KFS and Rhino Ark led by Mr. Mohammed Alio, the Assistant Director of the Kenya Wildlife Service, Western Conservation Area.

H.E. Governor Wycliffe Ambetsa Oparanya who initiated the project in 2015 said fencing of the forest is an essential project long awaited by the residents of Kakamega county. “The target is to have a well established ecological site and incorporate various species of wild animals into the forest to make it a tourism site as a way of generating own revenue within the county,” he said.
The Governor pointed out that the County government of Kakamega had already committed Shs. 100 million for the project but the funds are yet to be put to use due to unfinished environmental impact assessment. Vihiga County government which hosts part of the forest, estimated to be 10%, has also committed Shs. 30 million towards the implementation of the project. Fencing of the forest is expected to take one and a half months. Mt. Kenya and Aberdare are the other forests that have been fenced off.

The governor who during his first term in office toured the Democratic Republic of Congo (DRC) to determine the possibility of acquiring chimpanzees and gorillas from the country to Kakamega forest, said one condition that is to be met before bringing the animals to Kakamega is fencing round the rain forest to prevent them from escaping and causing harm to the residents and preventing unwanted encroachment of the forest land.

“I task you to also assess the possibility of having a cable car along the forest to enable tourists to have an aerial view of these animals,” said the Governor.
Animal species from Congo rain forests can easily adapt to the conditions at Kakamega forest- also a tropical rain forest. The governor called for joint subsequent meetings between the project implementers and the two governments (Vihiga and Kakamega) to ensure smooth implementation of the project.