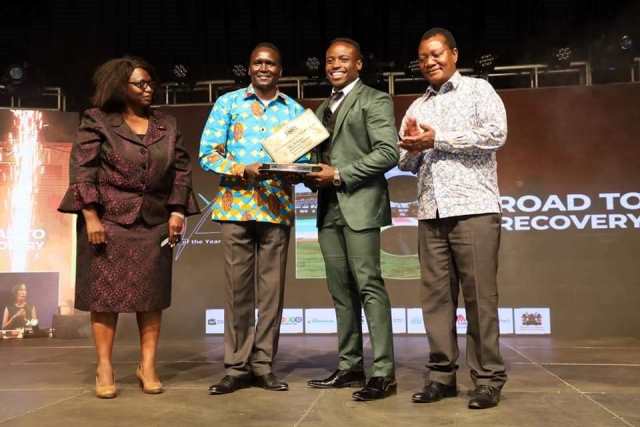 Pomp and color characterized the 18th edition of the SOYA Awards held at Bukhungu stadium Tuesday evening as guests clad in African attire, some in pairs, walked into the magnificent stadium to witness the event.

It was an opportunity for sports lovers more importantly Kakamega residents to interact with top sports personalities in the Country who included marathon world record holder Eliud Kipchoge, Faith Kipyegon, Ferdinand Omanyala among others who graced the occasion as Kakamega Isukuti dancers spiced up the ceremony as they “broke the bones” on stage.

“It has also put Kakamega County on the National map for successfully hosting the event,” said Dr Oparanya in a speech read on his behalf by his Deputy H.E Prof Philip Kutima.

He noted that it was not a mistake to pick on Kakamega to host the event adding that the County cherishes sports and has produced many sports legends who have left a mark in the country’s and global history, noting that the extravaganza gave Kakamega residents an opportunity to interact with renowned sports personalities in the Country.

He noted that the County has invested in sports adding that construction of the Bukhungu International stadium was one of the projects that have helped to promote sports alongside enabling the County host international competitions. The County has set up a Sports Fund to manage and run sports activities in the county.

The Governor called on the need to embrace good governance in management of sports to ensure that the Country achieves its goal in the sector. During the colorful event sports personalities and teams were awarded for their sterling performance in the season.

Among the teams and sports personalities that won awards were Vihiga Queens Football Club, Kenya Rugby Sevens and team sprint sensation Omanyala among others. Omanyala and Faith Kipyegon were crowned the Sportsman and Woman of the year respectively as Heristone Wanyonyi, the Walking race U20 champion won the Most Promising boy award. Other awards and recognitions went to Charles Okere 2021 Coach of the Year- Harambee Starlets, Vihiga Queens – 2021 Sports Team of the Year Women and Kenya Sevens Rugby – 2021 Sports Team of the Year Men: